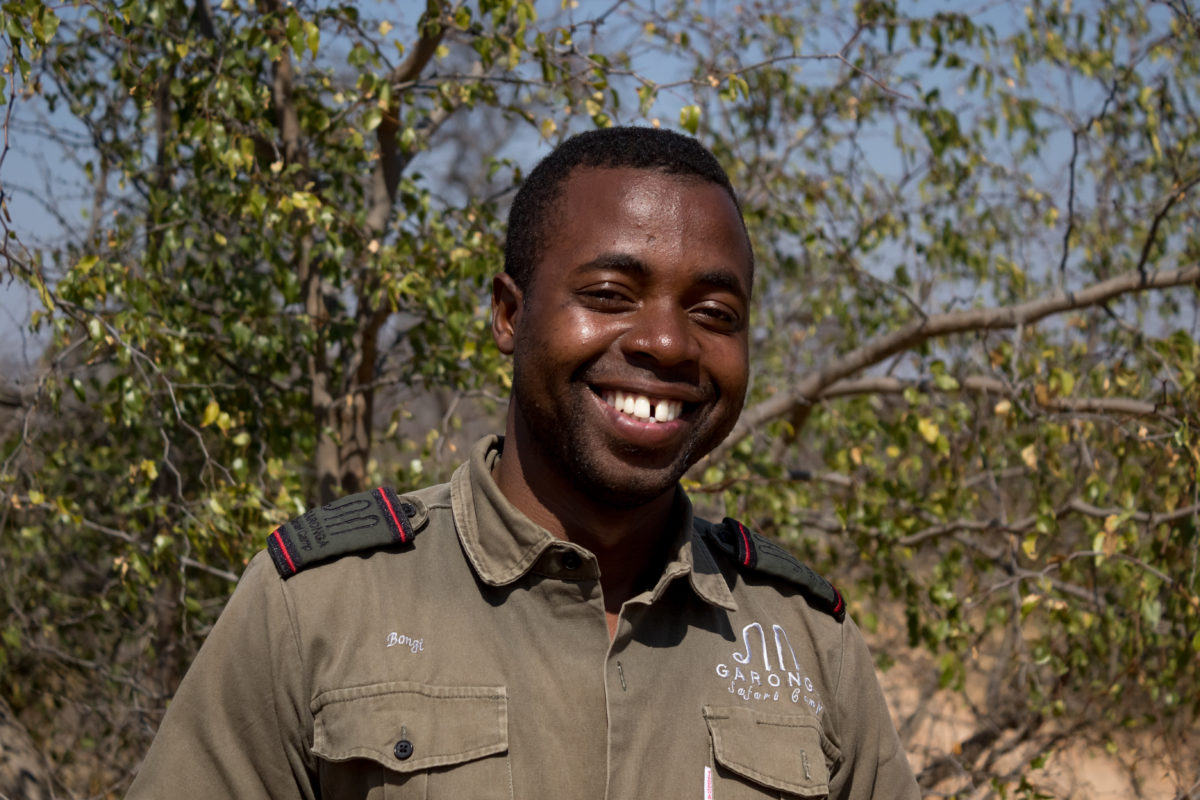 My name is Bongi. I have been working here at Garonga since 2018 as a tracker. This week it is my turn to tell you what we have been busy with.

It was on Tuesday 25 August 2020 early in the morning. That day were already drafted for the day on what we all going to do for the day. This day was the day of doing bush clearing. When I was sleeping I did hear the lions roaring around 4 in the morning. Before we go I asked other members if they did hear those lions? They said they did but they couldn’t hear which direction those lions’ roars are coming from. Before we go out we plan a route to drive past where we think we overheard them. By the time we depart the camp we did drive past where we wanted and were hoping to see those lions but we had no luck. So we just continue to drive heading towards where we were going to start doing the bush clearing. By the time we were busy doing bush clearing they just started to roar further east because we were in the westerly direction and we all wished to see those lion as it has been a while since we are not going out for actual game drive with guests, we were missing them a lot. I was the first person to start doing bush clearing so I was left behind other members they were further forward of me. I just saw the car driving coming back to me and I was already know that we were going to look for those lions indeed. They just tell me “let’s go!” we are going to look for those lions. Then we went. When we get to the airstrip we pick up the tracks of one lioness.

Sophie started to follow that tracks while we were busy checking the tracks of the rest of the pride we ended up getting it and it was also going at the same direction with the tracks Sophie was tracking and they were all going along over the main road. We picked up Sophie and start tracking them with the car until we get where they turned off from the road then we started to track them on foot again. 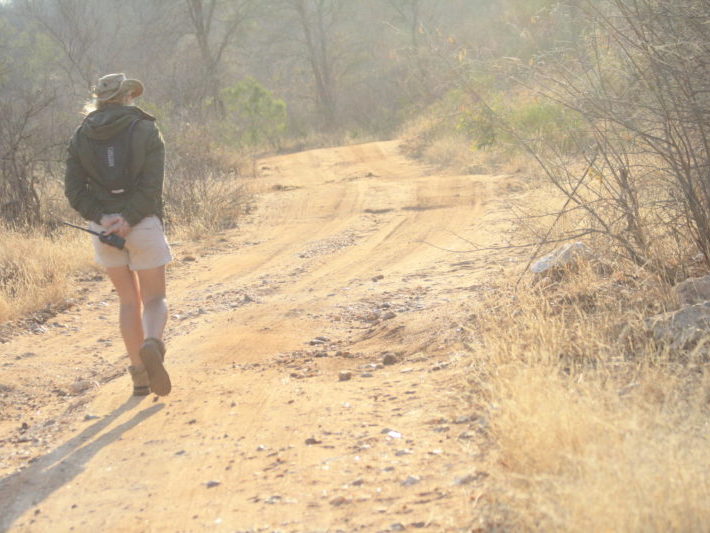 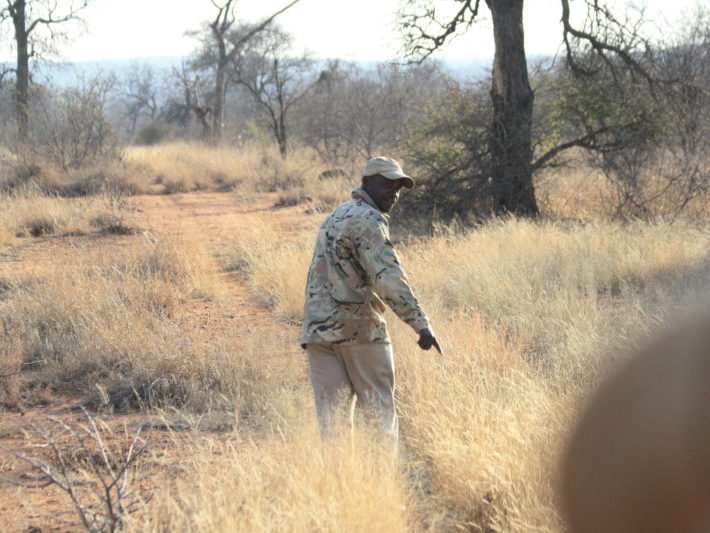 We stepped down and started tracking them on foot, when we were tracking them we were able to see that it seems like they were not far according to the way the tracks was looking like so fresh and their pee was very wet, when we get close to thick bushes we just stop hoping that we will hear them growling at us but the was nothing over around. By the time we looked everywhere there and get nothing we were tracking them like we are chasing them. We tracked them, they ended up crossing the road we call Shabalala (which means Kudu in Shangaan) and lay down close to it but when we got there they were already moved from there, by the time we starting to workout how far they can be gone we hear them growling at us very close to us! One of the trackers, we call him Mpho, was on the position where he can able to see them. He spotted one of the young females then we call the one who was driving the car which is Jaff, our head guide, to come and collect us so we can be able to go and see those lions. We were all happy to get to see those lions after a few days we don’t get to see them because of not going on game drive last week when we were busy in the office (if you missed our recent blog introducing each member of the Garonga Pride be sure to catch up with it here). 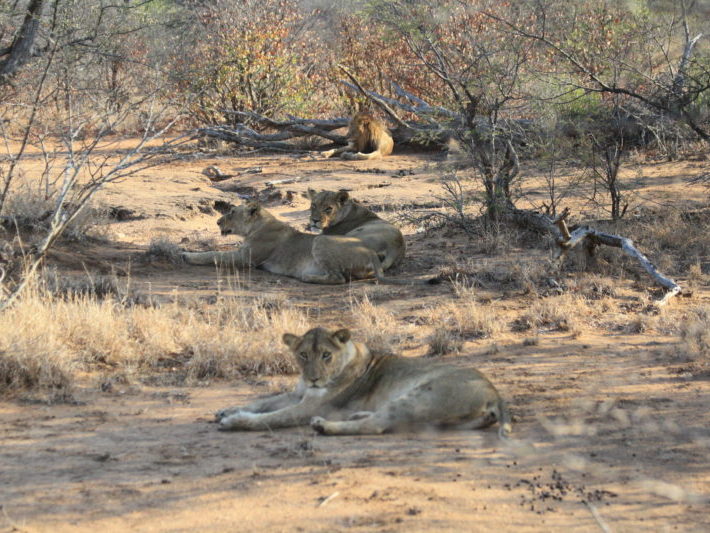 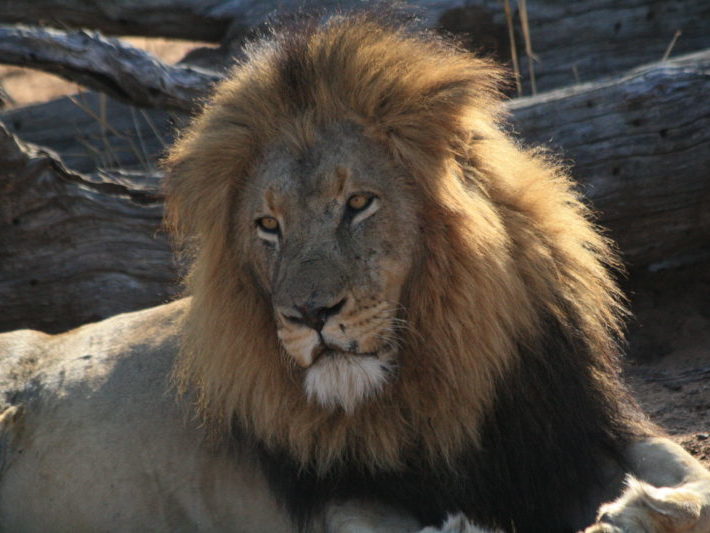 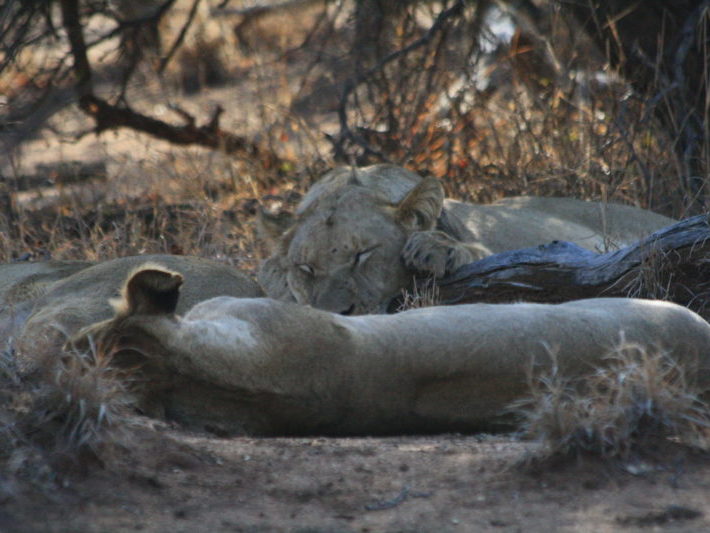 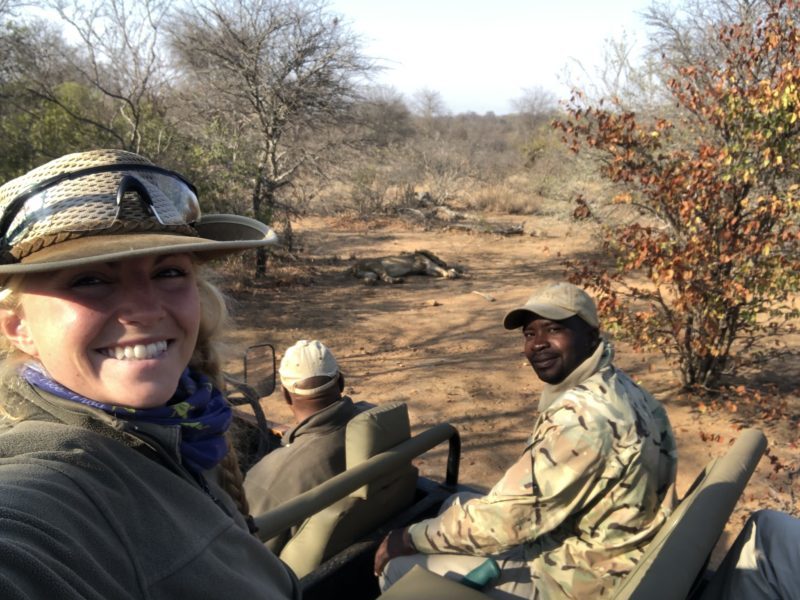 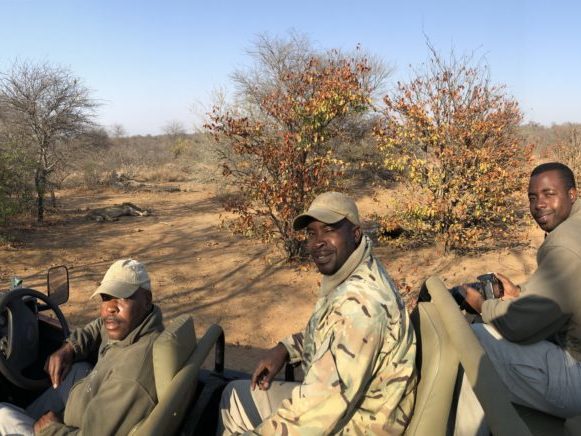 Even though we saw them but we weren’t satisfied because we were wishing to see the whole pride and there were only the two male lions (Kalahari junior and Zamula); one adult lioness; one sub-adult lioness; and three cubs. We did enjoy being around with them but we were still in need to get the whole pride. After spending time with them we left them in peace and drove back to camp. The following day was Wednesday the 26 of august. Early in the morning we were going on a monitoring drive and we were still looking forward to seeing those lions, all of them as a complete pride of lions. We did drive around while we heading to the side where we left them yesterday. We drove until we stopped at one of the dams hoping to pick up some fresh tracks, and indeed there were some which is where we started to track them on foot (me and Sophie), Jaff was left behind for the car as he also saw that we had picked up the tracks so he just started to drive straight to us.

As the tracks were going along the road from there we ride the car and then I started to perform my duties as tracker making sure we didn’t lose the tracks when we were busy driving. We did track them for almost about one an half hours before we got them. We tracked them until they crossed one of the roads we called mbabala (which means Bushbuck in Shangaan) and they got into the one of very massive blocks. By that time Sophie was driving as the lions have crossed the road and gotten into the massive block. She decided to drive around the block instead of walking in by foot and from where she did drive to is where we have picked up the tracks again. I reported to her that we have picked up the tracks again when I take my head up and look very far I just spotted one of the male lions that we call Zamula laying down in the distance away from the rest of the lions. We took pictures and we were so happy that we finally found them. When we looked around we get that still the pride was not complete. It was two adult female lionesses; and one sub-adult female with the two big males. It was seems like the sub-adult is on heat like about to be mating because also the males were not allowing each other to come close to where the females were. After all that we have just driven straight back to camp hoping that we will see them all one day when we will be doing game drive everyday again! 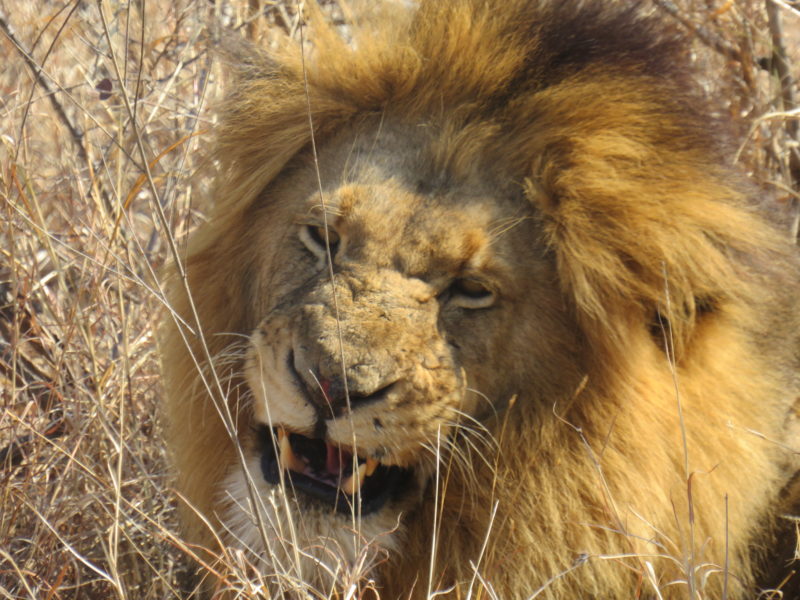 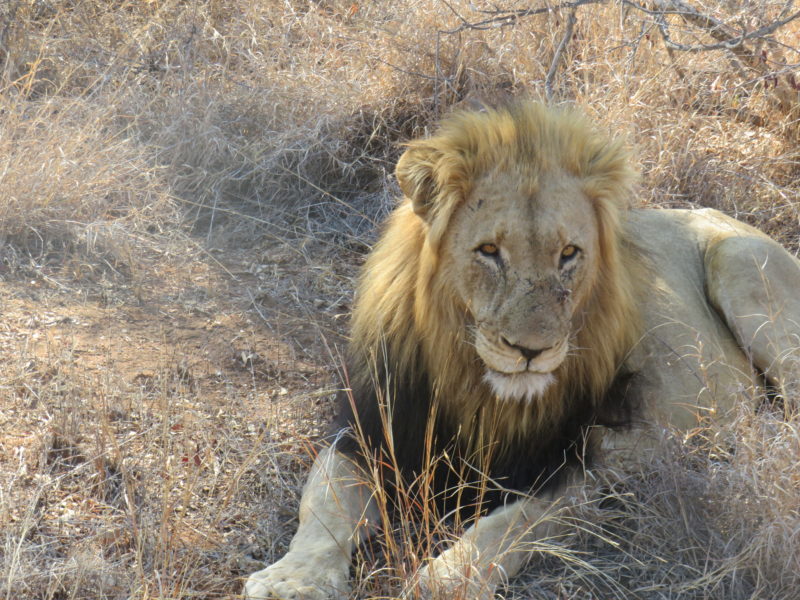 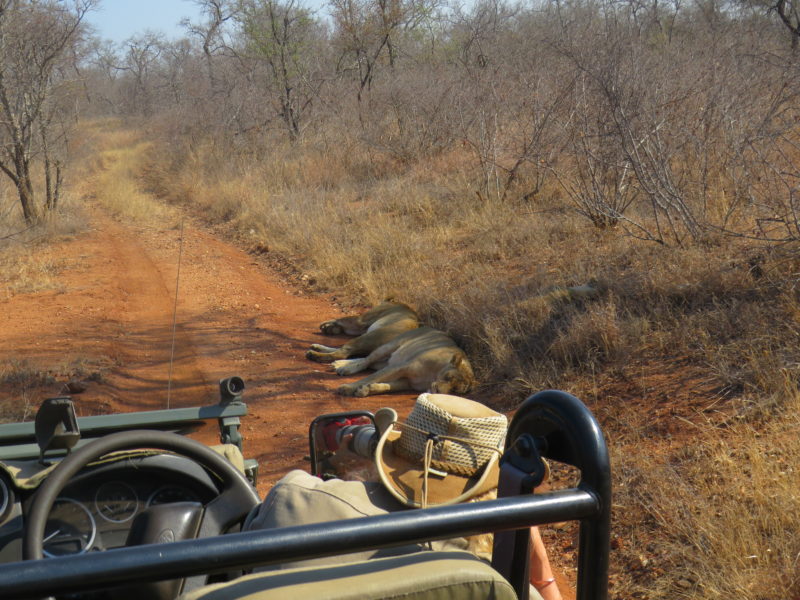 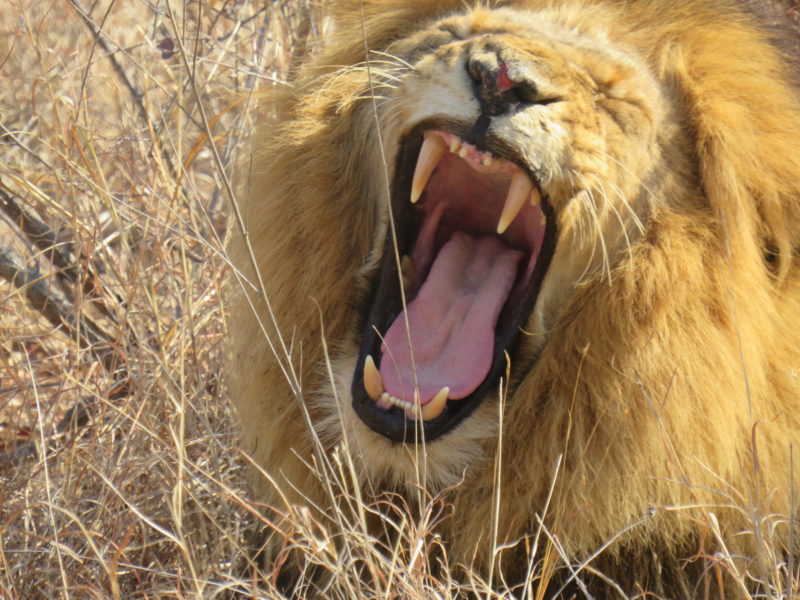 Have a good weekend!
Bongi