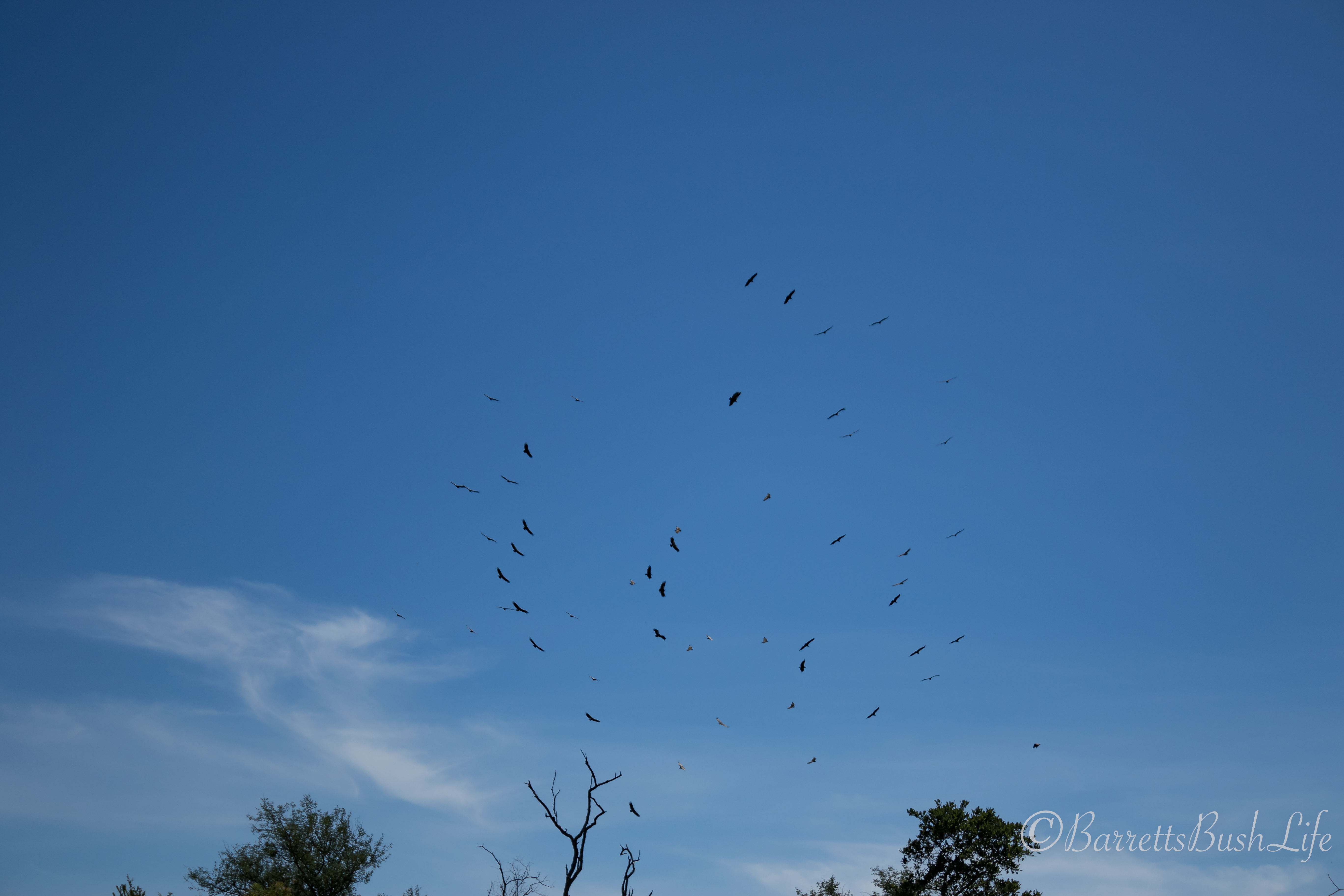 Humans are funny, we love to pick a side. There are certain creatures that we have decided to classify as “good” or desirable to see and spend time with; and others that we shun! Somehow hyenas and vultures inevitably seem to find themselves on the side of the “bush villains”. This is a designation that has always baffled me. If you have followed any of my previous blogs you will know that I have an incorrigible weakness for hyenas, and as far as vultures are concerned I just don’t understand the intensity of the dislike that is shown towards them, but today I want to give vultures their moment in the limelight.

In the reserve there are four species of vultures that we get to see. The most commonly spotted are the white-backed vultures and the more reserved hooded vultures. If there is a large carcass then sometimes we are visited by the larger cape vultures and the truly bizarre looking lappet-faced vultures. Vultures can be seen as the aerial clean up crew of the bush (not a glamorous job to be sure but an essential one nonetheless) with each species specialised in their own role. For example white-backed and cape vultures have tongues with unique grooves and serrations that allow them to gain access to soft flesh that might not otherwise be accessible using just their beaks. The hooded vulture on the other hand has an easily identifiable long and narrow beak, which is ideal for separating meat from bones but not well adapted to tearing skin from carcasses. Fortunately, the lappett-faced vulture has a strong beak designed for just this! As they say team work makes the dream work. 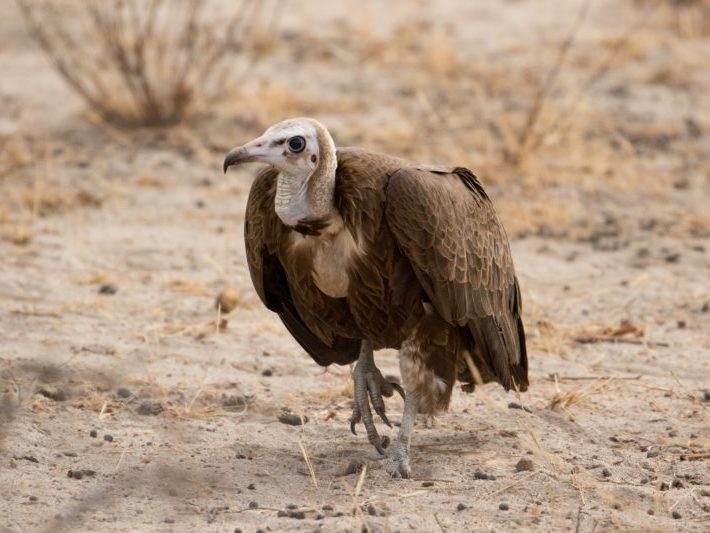 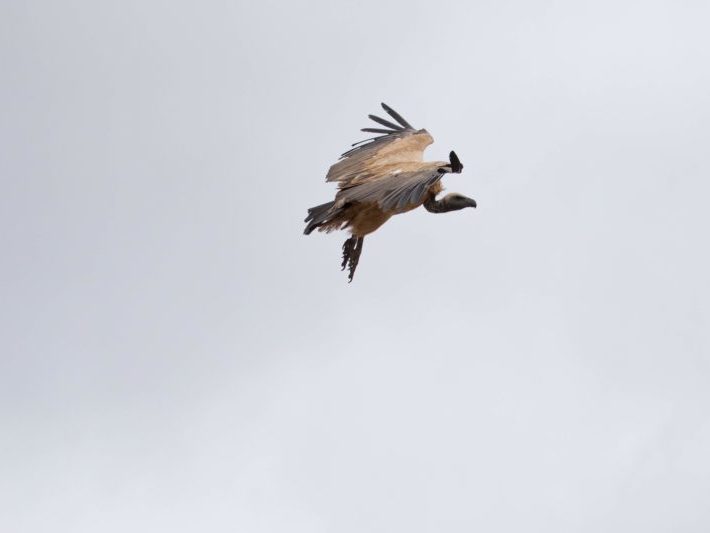 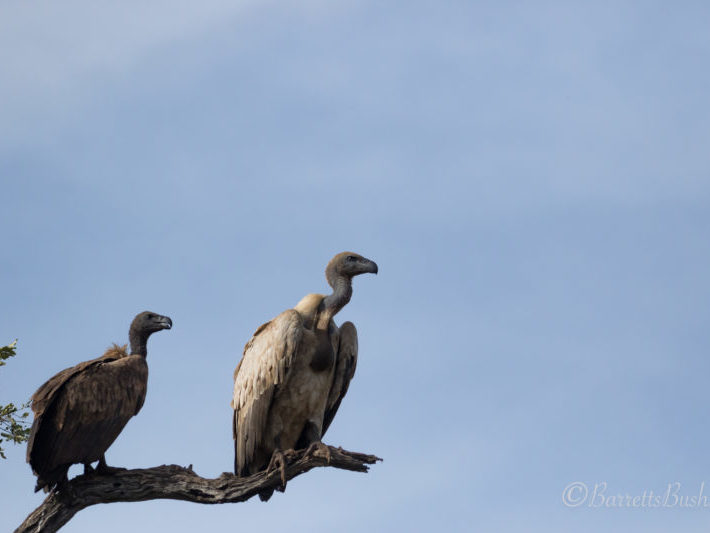 Vultures have incredibly strong digestive systems and contain various anti-bacterial agents in their guts that allow them to safely digest flesh no matter how rotten or rancid it might be. Indeed vultures are one of the few creatures that are capable of consuming anthrax and suffering no ill effects – pretty incredible stuff! When they actually reach a carcass typically the feeding style is swift. White-backed vultures can fill their crop between just 2 and 5 minutes of feeding! On the other hand the hooded vulture being outweighed and out gunned takes a different approach; these smaller vultures snatch a piece of meat and fly off to eat it out of the way of the melee. 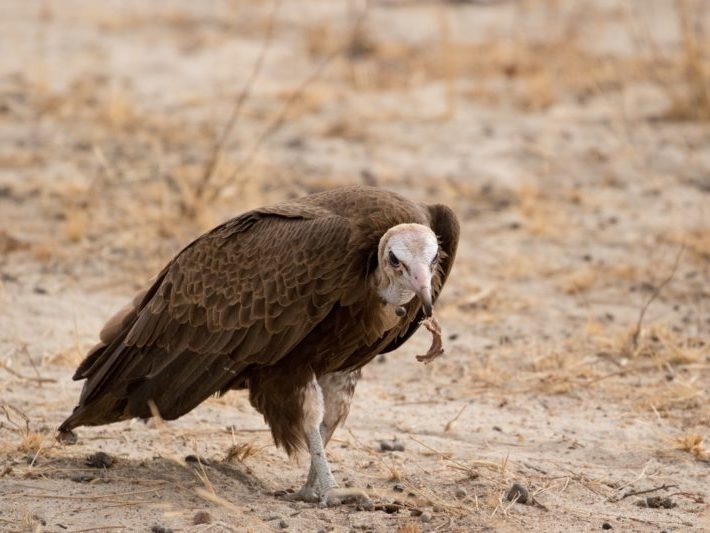 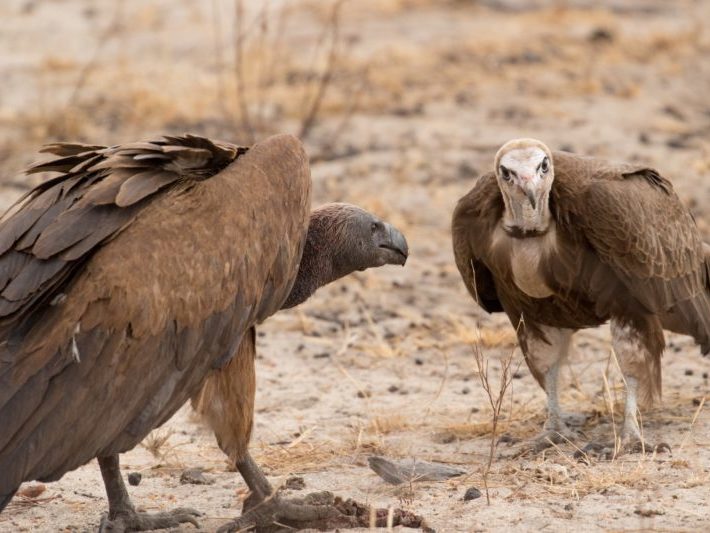 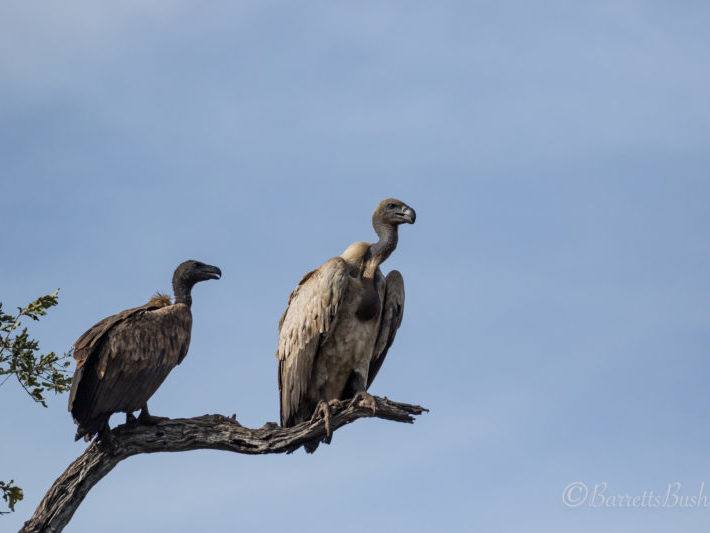 So far vultures are proving themselves to be pretty handy, they are carrying out work that is vital but generally unpopular. If we had no scavengers to clean up carcasses, then diseases could run riot through the wild playing havoc on animal populations. However, the question remains what uncanny sense do vultures use to find these carcasses that are in need of cleaning up? The answer is simple – their vision. Vultures have excellent eyesight. The white-backed vulture typically soars about 800m off of the ground on the thermal air currents scanning for food. The Rüppell’s vulture also occurs in South Africa (although has not yet been recorded on the reserve) and has been recorded flying at an eye watering height of 11,277m above sea level! At this height the oxygen levels are significantly lower than at sea level and these fascinating creatures are well adapted to cope with this. They have a special type of haemoglobin that maximises their intake of oxygen and all vultures have an intense layer of downy feathers to allow them to cope with the frigid temperatures of their high elevation flights! As if overcoming these difficulties wasn’t enough the target that the vultures are scanning for from such great heights is a stationary target – nothing more than a corpse!

The infamously sharp eyesight of vultures has lead to an unfortunate (and ironically unforeseen) side-effect. They are a highly prized as a source of “mutti” or local African magic. Due to their amazing vision local lore tells that parts of vultures can be used to see into the future. As a result these birds are often the target of local poachers. They are also the victims of poachers in another way. For a carcass the size of a rhino or an elephant several hundred vultures can congregate in their cleaning crew capacity. This is something of a beacon to rangers or anti-poaching teams and can lead to them finding a carcass and getting onto the trail of the poachers far sooner than they might otherwise have been able to do! In order to avoid this many poachers have taken to poisoning the carcass of whichever unfortunate animal they have poached. This can in turn lead to the deaths of hundred of vultures leading to these wonderful species becoming endangered with extinction. The IUCN redlist lists white-backed and hooded vultures as Critically Endangered with extinction, and the lappett-faced and cape vultures as Endangered with extinction. The population trend for all four species is decreasing. Whilst vultures might not be on everyone’s list of top animals to see if their numbers decline to the point where we can’t see them at all anymore the bush will be irrevocably changed for the worse.

Perhaps the poor reputation of the vulture comes from their eerie flight patterns. When a large carcass is in an area, columns of circling vultures can be seen from far and wide. As incredible as these birds are it is hard not to see such columns and feel a sense of foreboding. They are an undeniable signal that something has lost its life, and after all no-one likes to think about death. However, I take great heart from the fact that in nature, nothing goes to waste. Vultures are part of the essential circle of life, helping to return the nutrients of the deceased to the soil where it will contribute to the lives of countless other animals in the years to come. Vultures do their work without complaint and quietly shoulder the burden of dislike that is constantly sent their way, meanwhile they are acting as protectors to countless other animal species, keeping the environment clean and minimising the spread of diseases that could otherwise run rampant. Truly, not all heroes wear capes!