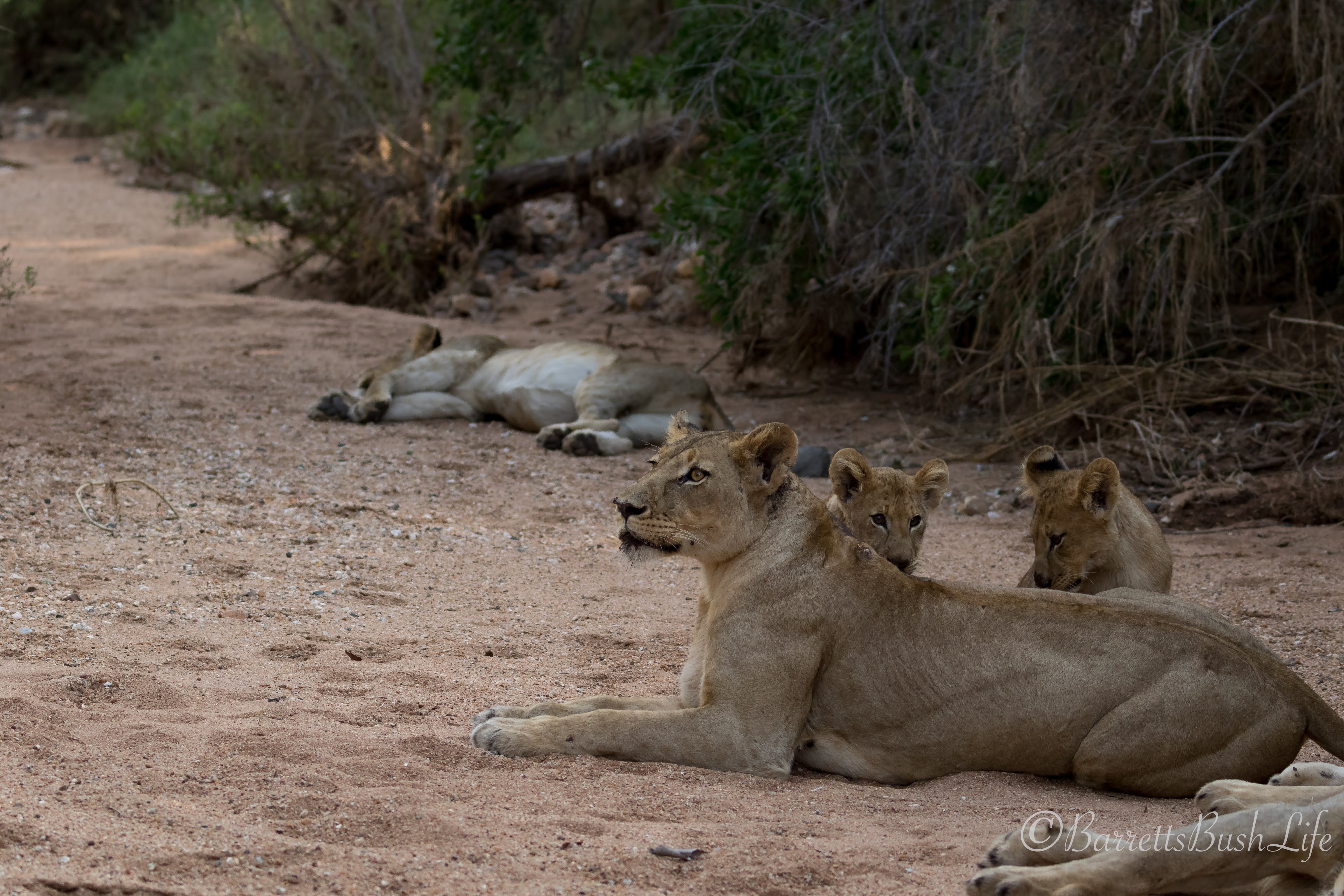 All sightings on safari are special but there are some that stand out more than others and that is usually because of the behaviour that you see. Guides are often asked by first time safari goers whether they get bored seeing the same animals all the time. The guide usually gives the guest a knowing smile (possibly even a wink if they are feeling cheeky), and replies that no two sightings are ever the same – not even if they feature the same cast! The guide then invites the guest onto their vehicle to come and discover for themselves how it is impossible to ever get bored with the safari world.

Just such a sighting happened recently. We had a wonderful family to stay for a very special occasion – a wedding! And at Garonga we LOVE a wedding. Not only does the lodge come alive and twinkle with romance at every corner but the bush itself seems to get the memo and pulls out all the stops with its sightings. The group had had a fabulous start to their stay with some fantastic sightings including the Garonga Pride feeding on a kill and growling and snarling in a way which rumbles straight through you as you watch. The wedding itself was a tremendous success, with a truly beautiful sunset to top off the magical ceremony and an evening of delighted partying.

The morning after the wedding was to be the last game drive for the group. We were eager to finish off on (yet another) high and so Bongi and I planned to do our best to find something special. As we set out we heard that the Garonga Pride had been spotted. The Pride was in the open and it would be wonderful to see them socialising with each other instead of growling and snarling as they had been on the team’s first night, so after a quick check with the guests we headed for the Pride’s location. As we drew closer the lions hopped up and were on the move, the guests worried that we might not be able to find them again. But Bongi and I have spent a LOT of time following these cats and we had a hunch about which route they might be taking. Instead of going straight to where they were last seen we decided to try and predict where they would pop out and we managed to time it just right!

The lions had moved along a drainage line and found comfortable places to relax in the sand very close to where one of the roads crosses the drainage line. We had a lovely sighting of the whole pride showing great affection to each other (and tolerance to the high-energy cubs) when suddenly the atmosphere changed. Two of the sub-adults (one male and one female) perked up their ears, jumped up and stalked past the vehicle and over the road. In hushed tones we quickly explained to our guests that these lions looked like they had seen something they wanted to hunt. Exactly as everyone turned their attention to watch there was a guttural roar! Bongi and I spun to look at each other with matching expressions of surprise and delight – the sound we had heard was unmistakably the sound of a leopard!

From sound asleep to up and alert – something had caught the pride’s attention.

At the leopard’s roar the rest of the pride’s attitude changed immediately, they all jumped up and raced to give chase to the rival predator. It was particularly interesting that the pride ran off, ignoring the two, 4 month old, cubs that were with them. After a moment’s indecision the cubs gave chase as well. We set about making a plan to follow! Working out where predators have moved in the thick bush is no easy task. Both lions and leopards are designed to blend perfectly with their environment but we moved slowly, turning off the vehicle to listen every now and then, and honed in on the sounds we could hear. After a few minutes of searching we could finally see the tip of a lion’s tail twitching inside the drainage line in front of us but that was about it. We made a mental note of the trees that were above the lions’ position and went around to try and see what was happening from the other side of the drainage line. When we got there not only could we see where the lions were relaxing inside the drainage line but we could also see where a VERY unimpressed young male leopard was stuck at the top of a tamboti tree! Talk about finishing the trip on a special sighting!

This poor leopard did not look very happy with his situation. Leopards are far more agile tree climbers than lions, but lions can climb trees too if they really try. Leopards need to choose a tree with a very straight trunk and no low-hanging branches – this means that lions will struggle to climb up after the leopard. In order to avoid his eager pursuers the young leopard had selected a tree that did have a very straight trunk, and did not have any low-hanging branches, however, the tree itself was quite young – and the day was quite breezy! The leopard was perched quite precariously in the topmost branches and each time the wind blew he would sway alarmingly with the tree!

As we watched we noticed that the leopard was stepping very gingerly on one of his back feet, he had a fresh injury which was almost certainly from the lions and it looked like this leopard had escaped by merely a whisker! Luckily his injury didn’t look too serious and certainly hadn’t prevented him from a speedy climb. His irritation with his situation was all too apparent, his ears were flat to his head and every now and then he threw a look our way which seemed to say “you have GOT to be kidding me”! Whilst up the tree the leopard kept a close eye on the lions in the sand, unluckily for the leopard the lions looked to be in no hurry whatsoever and certainly seemed more comfortable that the poor leopard! After thoroughly enjoying the sighting we agreed that the lions and leopard had reached a stalemate. The lions could not climb the tree and the leopard had managed to seat himself more comfortably and was clearly in no rush to come down and challenge the lions again. We were now thoroughly invested in the leopard’s fate, but luckily leopards are renowned for their stealth and patience. At some point the lions would get bored of their vigil and leave whereupon the leopard would be able to slink down the tree and disappear once again in the thickets of the bush. With our adrenaline levels slowly subsiding we decided to leave the cats for the morning and go and find ourselves a coffee.

It was certainly an incredible final drive for the wedding party and it was a wonderful experience for Bongi and me. It is not often that you get to see apex predators interacting and to have the chance to study the whole interaction as it played out was fascinating to us. By the time the afternoon drive went out the lions had moved on and the leopard had left his precarious perch. Such is the joy of the bush, you never know what you might find but we can guarantee that no two drives will be the same!

All the best,
Sophie 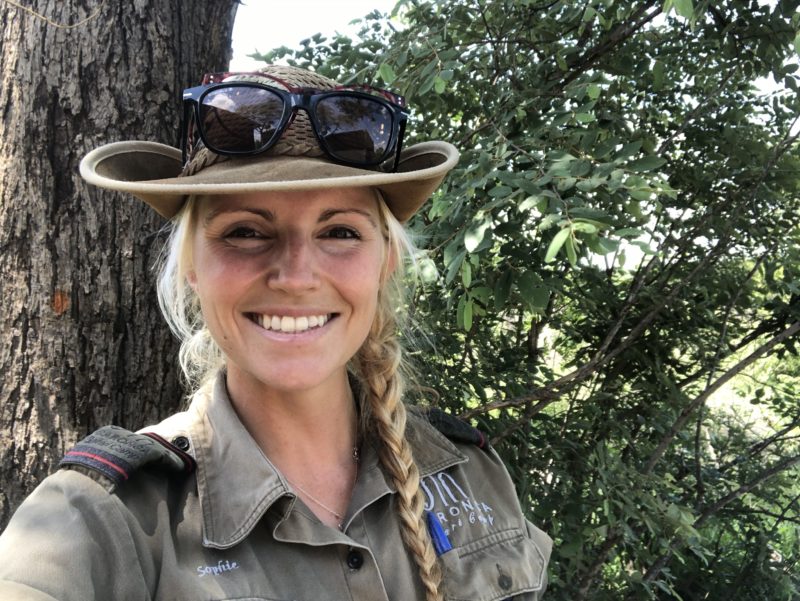