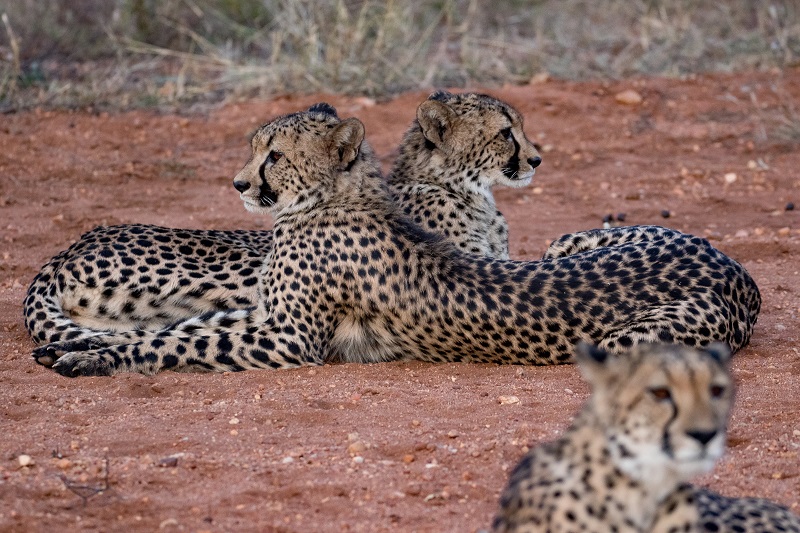 As the Starks would say – winter is coming! The mornings have a definite bite to them now and our days are starting with us more and more bundled up. On Friday last week the Safari Squad were doing a passable impression of the Michelin Man and were on our way to finish up clearing the airstrip.

These morning maintenance activities are great for the time of year, giving us a chance to warm up in the chilly mornings and do something productive too. Last Friday, however, as is so often the way in the bush, nature had other ideas! We had barely left the lodge when an impala ram popped over the dam wall, almost into the road and, despite our presence, stared fixedly back the way he had come.

Spider senses tingling Richard, Kaizer and I looked at each other, this kind of behaviour had to mean a predator was close by (probably heading to the camp waterhole)! Given the last known positions of the lion prides within the reserve we were pretty confident that our predator had to be a leopard or a cheetah and, to our absolute delight, as we rounded an impressive jackalberry tree we spotted her (pun intended). It was the lone female cheetah that we had introduced into the reserve back in 2018 (remember, when Patsy the cheetah tasted freedom?). We watched, smiling widely, as she made her way down to the waterhole to drink!

After drinking the cheetah seemed playful, clearly enjoying the cool morning temperatures as she bounded through the long grass and up towards the quiet lodge. Without our usual hustle and bustle of guests in camp the wildlife has wasted no time in re-colonising the lodge. We have a sizable herd of impala who have taken refuge there and seem to be hoping the human structures will dissuade predators from joining them – their theory was about to be tested!

At first we thought the impala were safe. The cheetah seemed more inclined to follow around the bend of the riverbed when suddenly her head cocked and her ears stood at full attention, she had heard something moving in the camp. What followed was a blur of activity, the cheetah stalked between Tents 4 and 5, an impala ram got spooked and clattered right across the deck by the pool, disappeared behind Tent 4 and suddenly both cheetah and impala were visible between Tents 5 and 6 as the unlucky impala was firmly captured by the cheetah. As she brought the impala down the pair once again disappeared from sight! Everything had happened so quickly we hadn’t even thought to chase the action with the camera but with a bright and excited look at each other we raced back around to the lodge to see what was going on!

The cool mornings are such an energy boost for the predators! © Sophie Barrett

The excitement was palpable, lone cheetah have an average hunting success rate of about 40%, and of those the chances of being in exactly the right spot to see the kill is rare. It was barely 7am and nature was thoroughly spoiling us! We hustled back to the lodge, keen for a closer look. We collected Jazzman (the current stalwart of our security team) and went to see what we could find. We passed the main area, then the boma and finally Room 4 before we saw her. The impala was still struggling but the cheetah had him exactly where she wanted him and before too long it was over. As morbid as it sounds it was incredible to see how far this cheetah has come.

When we released her in 2018 she was barely two years old and not yet fully competent at hunting for herself. More often than not her attempted hunts would result in a waste of energy and an empty stomach, more than once we had seen her bring an antelope down only for it to scramble up and away as she hadn’t yet mastered the death grip. As cheetah are endangered with extinction the survival of every individual is hugely important for the future of the species; seeing firsthand how this female has flourished and matured into a sharp-eyed huntress was such a proud moment for all of us on the team! After eating her fill she spent the rest of the day relaxing in the camp – clearly enjoying the amenities that lodge has to offer! We were thrilled to have such an unusual guest to stay and I ended up spending a couple of hours sitting on the deck of Tent 4 just enjoying her company. 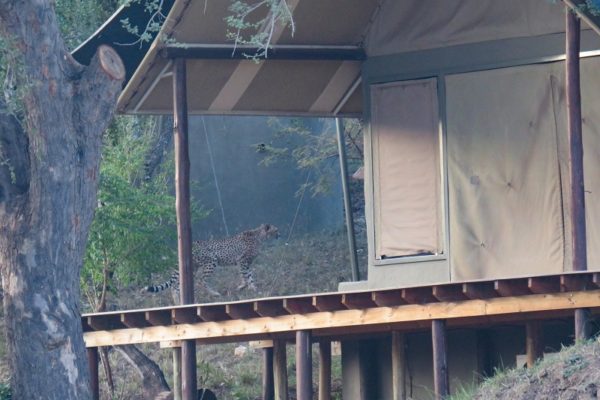 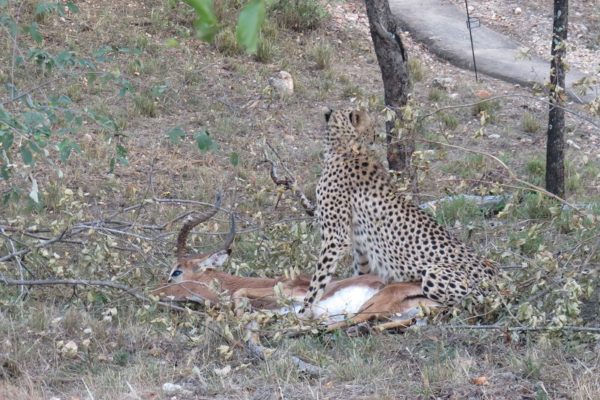 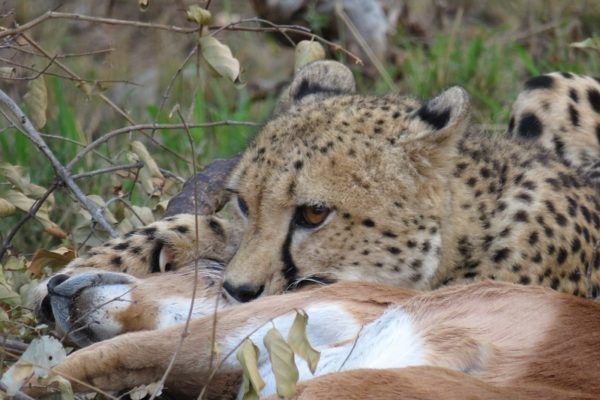 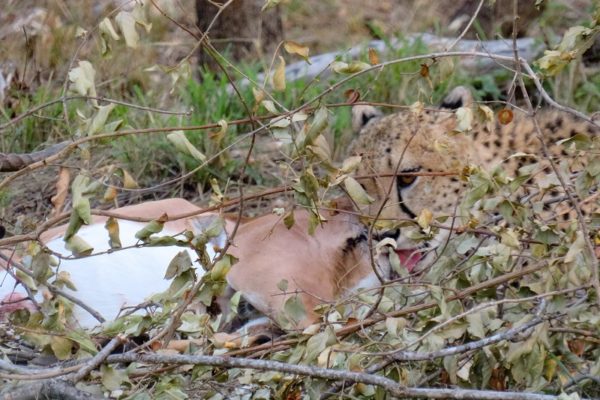 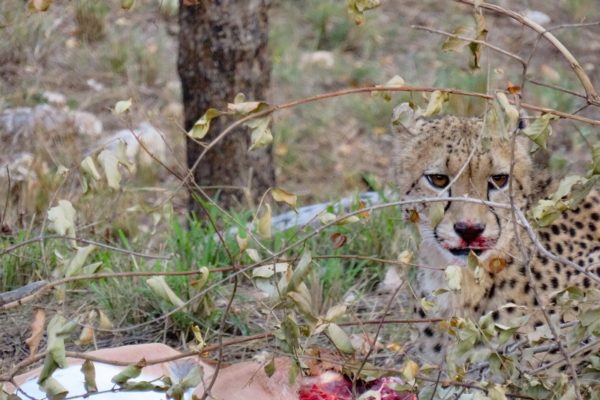 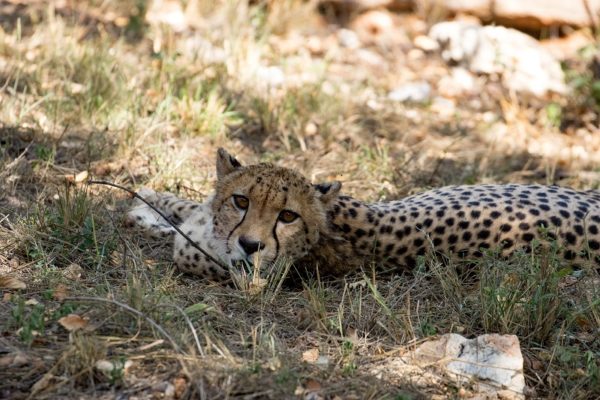 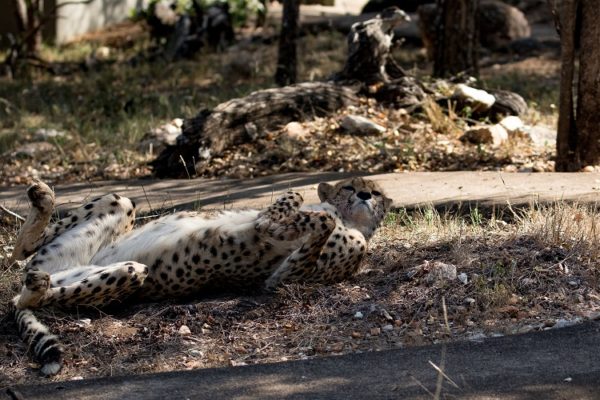 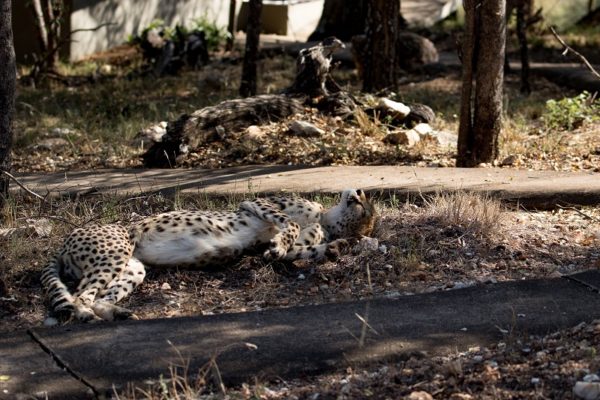 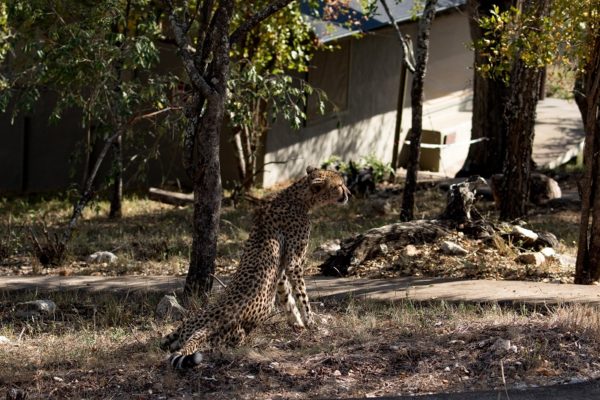 Little did we know that this was not going to be the last adrenaline filled sighting of a cheetah for us that week. For those of you who have been following the Garonga Diaries you might have picked up that our Safari Camp Manager, Loraine, is somewhat of a fitness fanatic. Her training programme often takes her running on the airstrip around sunset, the perfect time of day to take advantage of the cooler temperatures and to enjoy a private African sunset. I think the animals must have heard about all the work the Safari Team have been doing in the bush because recently everyone has been coming to Garonga to check it out and, sure enough, on Tuesday evening, as Loraine was starting out her run she was joined by some rather unusual pace setters! Approaching level with Bernie’s house on the airstrip there was a flash and a cheetah past just in front of an astonished Loraine, as she opened her mouth to call out another one darted behind her, now frozen to the spot she started to shout in earnest as a THIRD cheetah dashed past her too!

The cheetah seemed to be as bamboozled by Loraine as she was with them and left her be as she raced back to the farmhouse to fetch the rest of us. We grabbed our cameras, hopped in the game-viewer and hustled back to where Loraine had left them, a quick glance down for tracks and suddenly we spotted the trio, lounging further up the airstrip like nothing had ever happened! We were treated to a wonderful sighting. This female cheetah is the oldest female in the reserve and her cubs are now about 20 months old. They are nearly fully grown and at some point within the next six months will probably be left to fend for themselves. We watched as they unsuccessfully stalked a herd of impala, lounged together and, as the last of the light slipped away, finally headed off into the bushes. 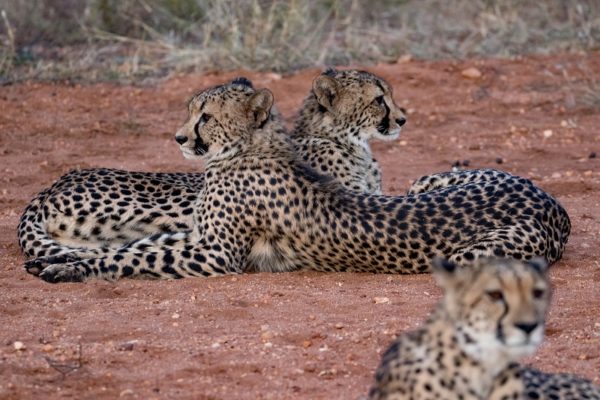 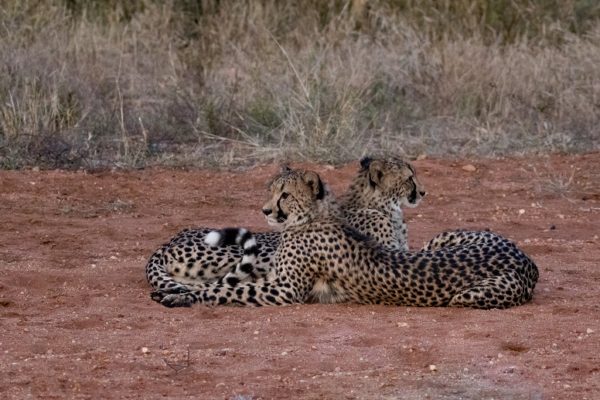 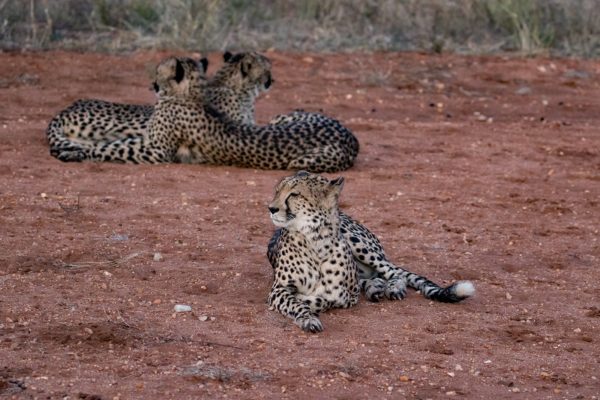 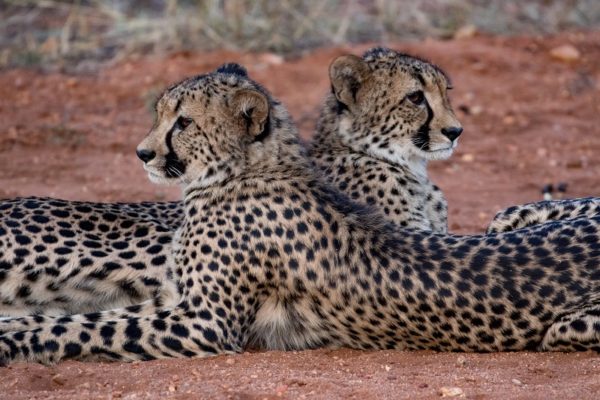 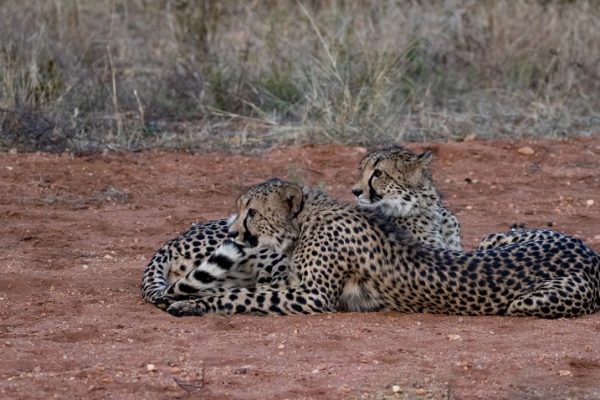 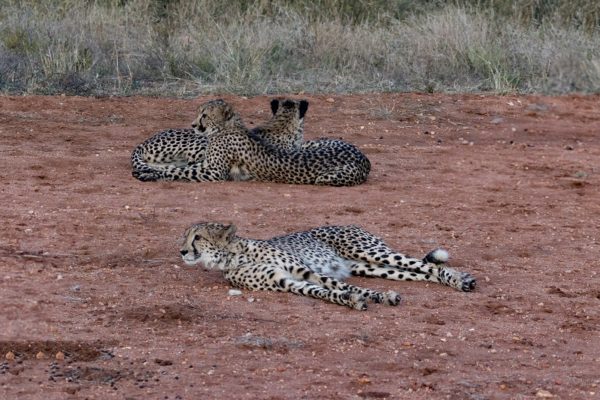 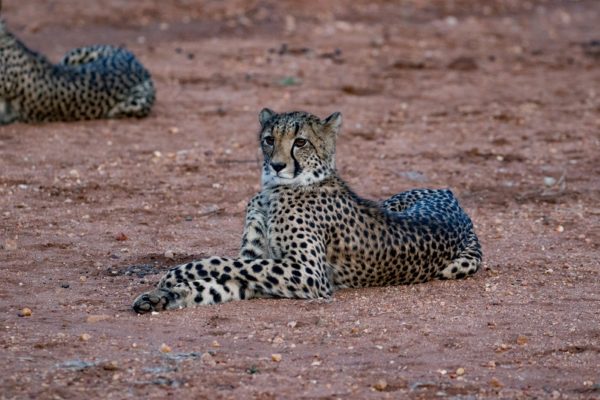 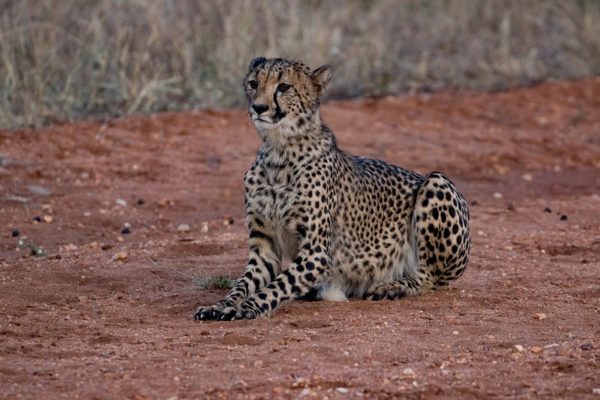 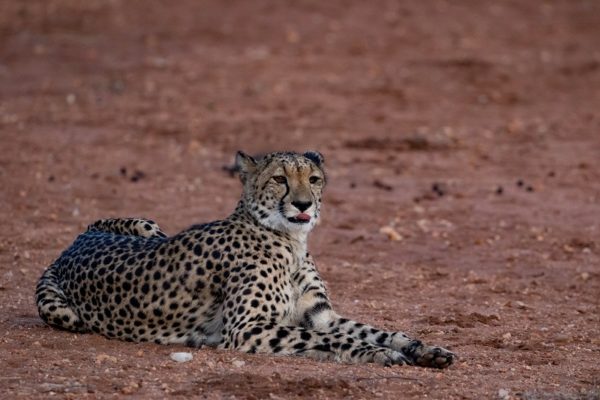 The next day we asked Bernie what he had thought of the commotion that took place nearly on his doorstep and he replied with a wink, that he had been fairly confident Loraine, as a competent camp manager, had it all in hand and that if she hadn’t at least she was doing what she loved and maybe that was one less salary he would need to worry about!