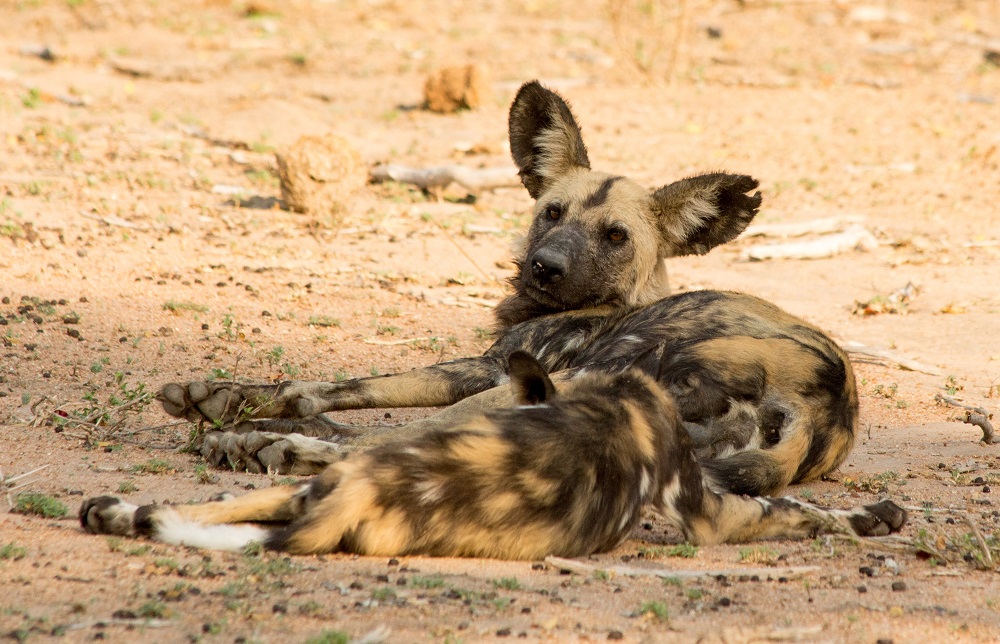 As a guide I live in a heady world of adrenaline highs and lows. Each drive and walk is filled with excitement and possibility – you never know what the bush is going to offer you that day. The longer you are in the business the more superstitions you pick up, you start to notice what order you dressed in, or whether you were wearing your hat the day you had a particularly unusual sighting. For me it has reached the stage where I have collected seven pairs of lucky socks just to be sure that I am never without!

One day, back in October, I must have been wearing the best of all the pairs because we had a drive where the wilds truly spoilt us. We were off in search of whatever wonders the bush had to offer and headed to one of my all-time favourite spots in the reserve. A place where the terrain changes to wide open plains with stunning views all the way to the Drakensberg mountains. As we were nearing our destination the radio crackled to life, and my heart stopped. There was just the faintest whisper of the word Madatsh – which means wild dogs – and suddenly our peaceful morning erupted into action. I hit the brakes and turned to my intrepid passengers. “Listen up team. We have a chance, a small one, barely even one at all, but a chance to see the pack of wild dogs that are in the reserve. What do you say?” Everyone’s expressions switched from confusion to anticipation, and just like that we were on the scent. The dogs had been spotted by a member of the team who was on their way out of the reserve for an appointment in town. They couldn’t stay with the dogs. So all we had to go on was the last location the pack had been glimpsed.

Wild dogs have many names, cape hunting dogs, painted wolves and ornate wolves to name a few. But regardless what you call them it is hard to get around the fact that they are the most endangered carnivore in the whole of Africa. With an incredibly complex social structure (recent research suggests they actually use a quorum based voting system for important pack decisions), an active disposition and just plain rarity value, getting to see the wild dogs is always a treat.

As is so typical with the painted dogs they were on the move. Wild dogs can fairly be described as the marathon runners of the bush. They are built light for speed and stamina, and typically will make a kill once a day, with peaks of activity around dusk and dawn. Now if the dogs haven’t had a successful kill around dawn and the morning is cool enough they will continue the hunt until it gets too hot for any activity other than napping to be really sensible. It just so happened that this morning was cool, cloudy and overcast – perfect weather for predators.

As we headed in the direction of the last visual of the dogs Bongi and I were batting ideas backwards and forwards about which roads would maximise our chances of finding them. Working with Bongi is a dream, I often describe him as my work husband, we have formed a great partnership and understand each other’s habits well. It also means we are able to work out the most likely direction the animals have taken pretty well, this is a combination of both art and science so you never get a 100% success rate but if one of us has a tingling feeling then we run with it!

Needless to say that day we had a tingling feeling. We began to methodically work around the blocks and suddenly a cry of “Dogs! Dogs!” split the air. There they were, lying panting in the road but not for long. After a quick pause to catch their breath they were off. Up and down the road changing directions in a way that seemed almost designed to bamboozle any trackers on their spoor. Before long we lost visual. But the adrenaline levels of the whole team were sky high. With huge grins on our faces no words were needed to explain how exciting the moment had been. Bongi and I were not satisfied though, there was still a tingle and we shared a look. From the way the dogs had been panting and the direction they had headed in it was just possible that they would be wanting water and wanting it soon. We started to head to the closest waterhole eyes peeled and hearts hammering.  We had no idea just how lucky we would be when we got there.

Coming around the back of the waterhole to check for tracks we stopped, switched off the engine and gasped. Trotting over the dam wall appeared one, then two of the dogs looking as different as it was possible to look compared to mere minutes before! Their faces were drenched in blood, their sides pumping like bellows as they came to the waterhole to drink, lying in the cool mud to help drop their temperatures. Clearly their fearsome hunting abilities had been put to good use, and – YES through the binoculars in the clearing on the far side of the waterhole we could see the carcass! 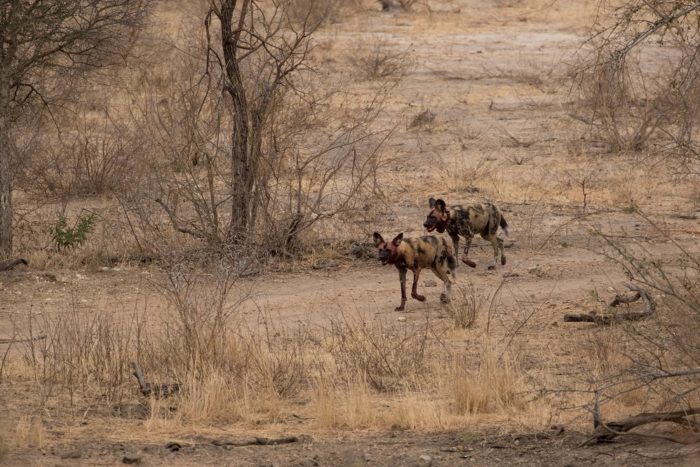 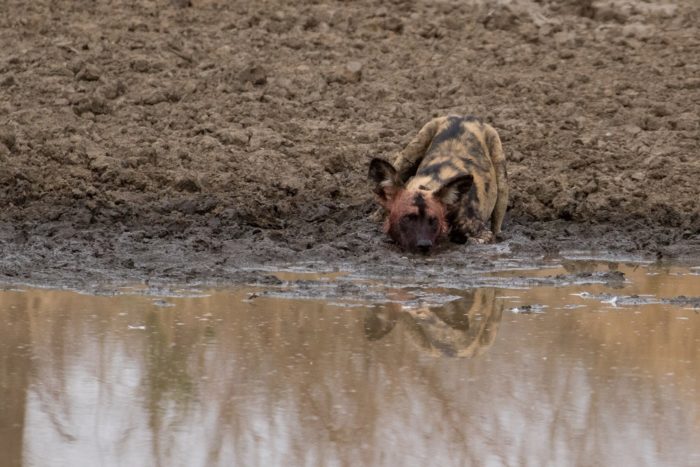 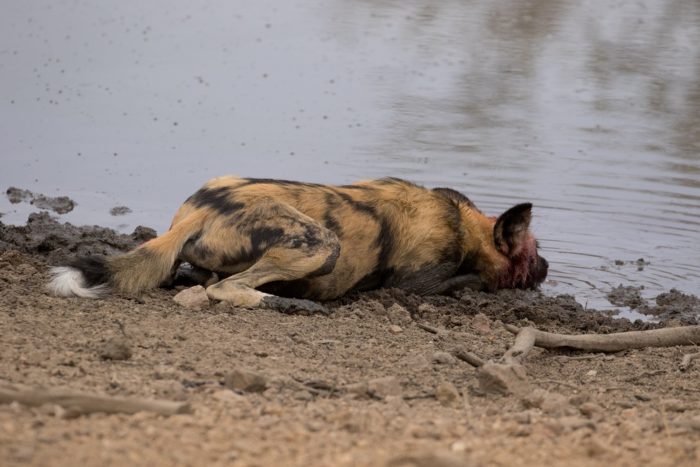 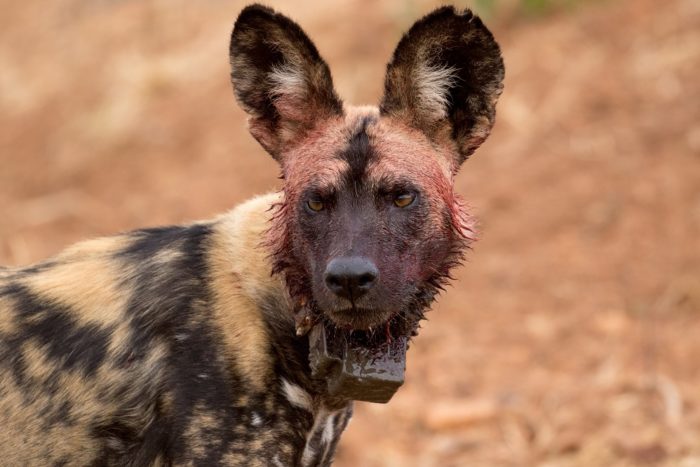 What followed was a fascinating display of scavenger vs predator hierarchies. Many predators after a successful hunt need to take time to cool down before they can enjoy the spoils of their success, and this was exactly what the dogs did. They lounged around the waterhole and in the cool sand behind the dam wall. Meanwhile we went to sit, observe the carcass, and wait. The first and boldest scavenger was a lone hooded vulture who dropped like a ghost from the sky, and waited on a dead branch to check if the coast was clear.

Next the black backed jackals started to circle. With only one of them bold enough to steal from the carcass itself. Jackals are light-footed and alert, all of the traditional African tales about them focus on their cunning and quick-wittedness. Luckily for them they are typically too small to inspire true enmity from the larger predators but they still need to stay alert to avoid getting into real trouble.

Whilst the dogs recovered from their exertions we watched enthralled as the scavengers jostled for position. White backed vultures soon came to join their hooded cousin, their bigger size and bulk chasing the smaller vulture to the fringes. The cunning jackal racing back in and chasing off all of the white backed vultures who had moved in to feed on the carcass itself. 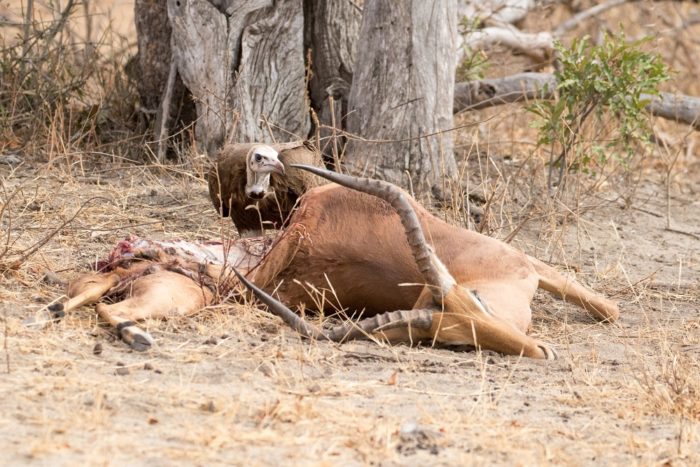 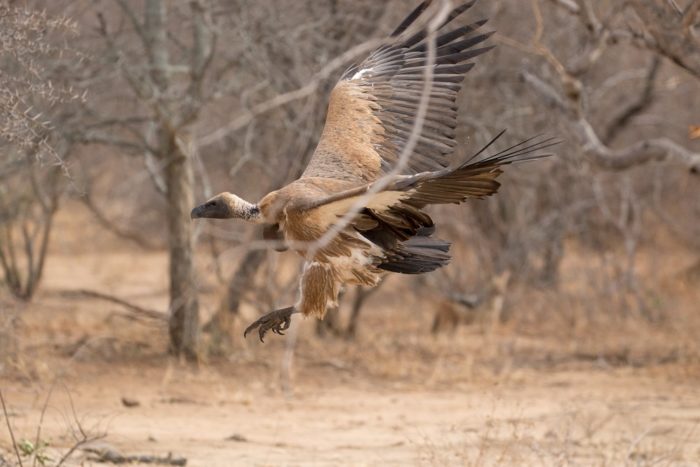 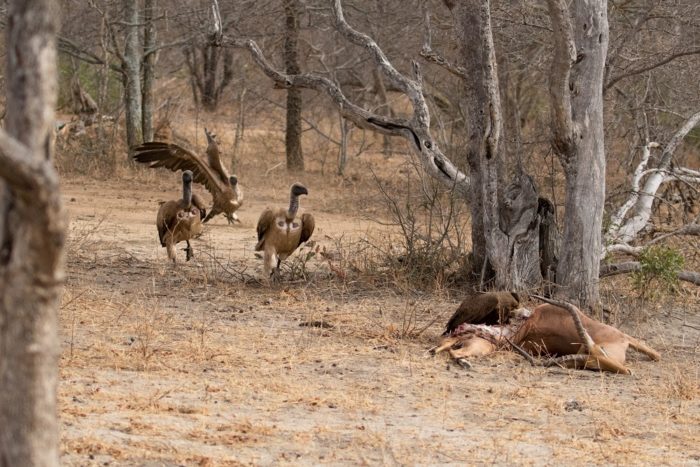 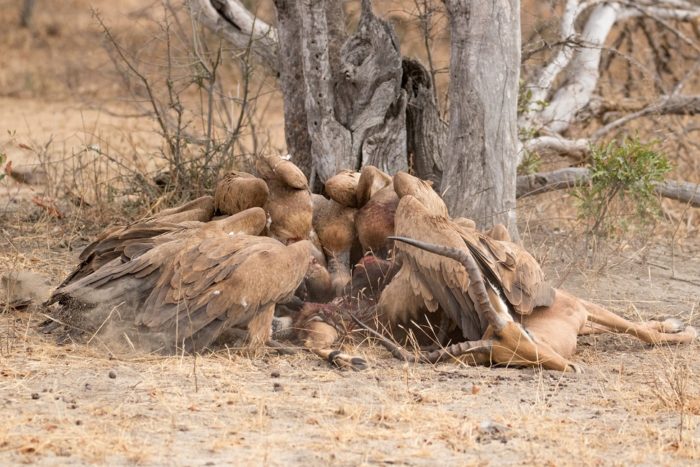 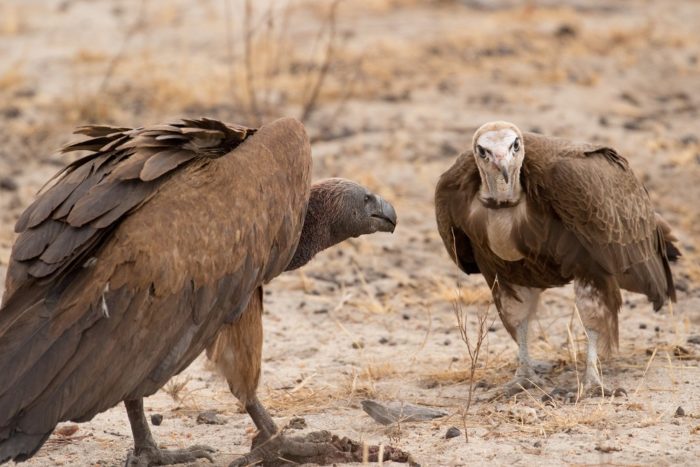 And the battle for dominance amongst the scavengers begins! © Sophie Barrett

Finally the painted dogs had cooled down enough to enjoy their meal and they came bouncing back chasing both the vultures and jackals away. It is fascinating, if gory, to see them feed. They do it in the same way that they hunt with a sort of frenetic energy, and intersperse their feeding with bouts of playfulness, either playing with each other or chasing away scavengers that are getting too bold. 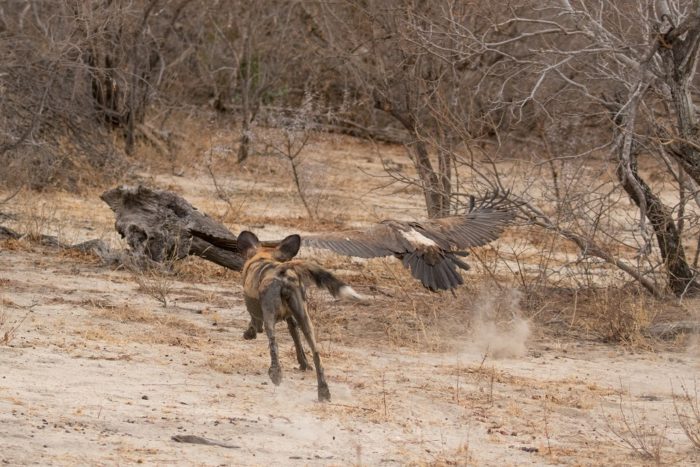 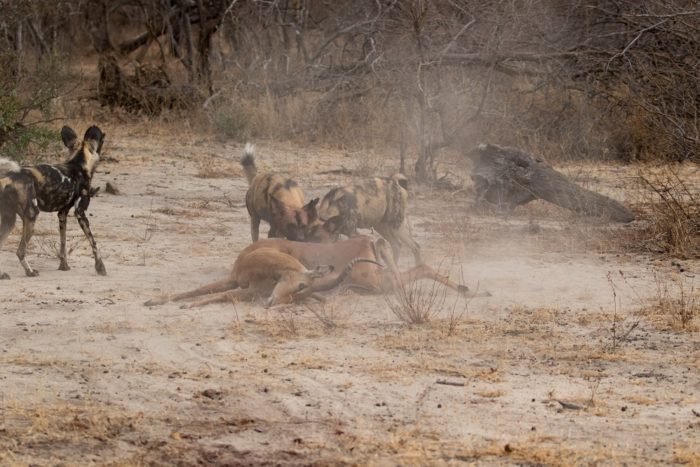 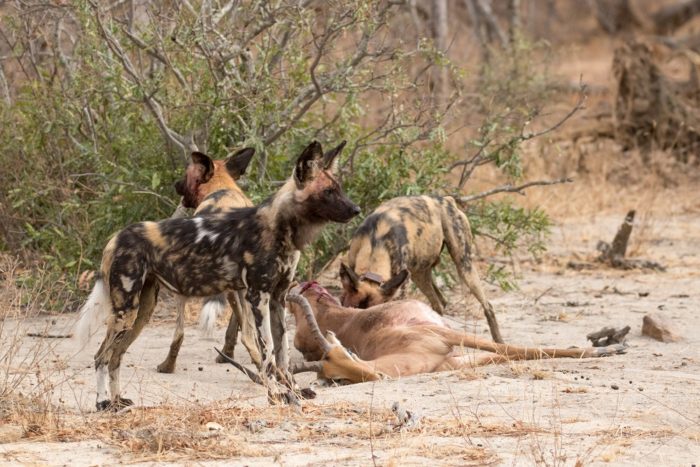 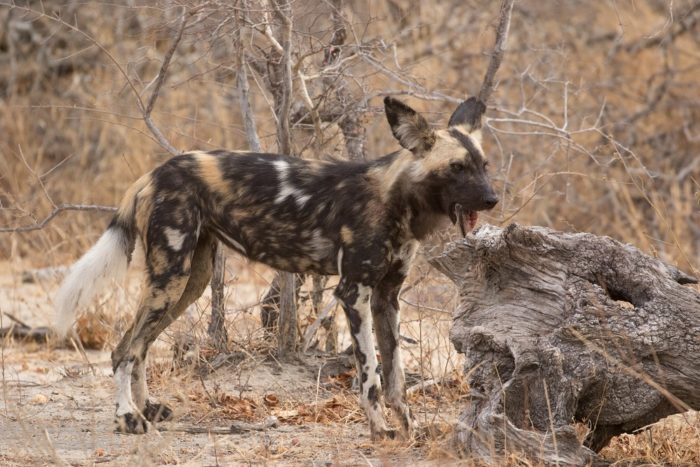 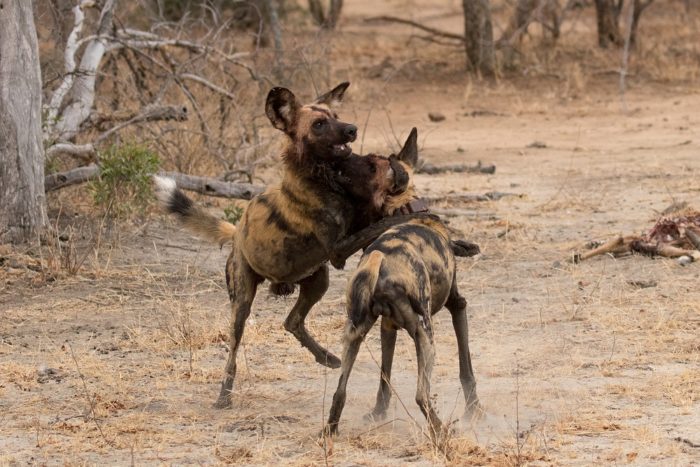 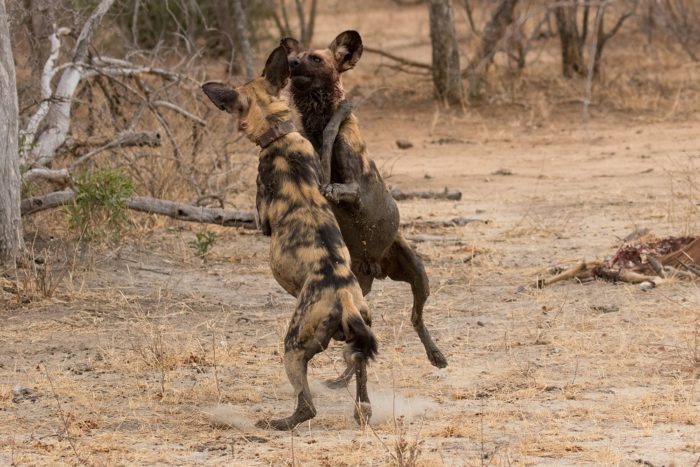 The wild dogs return and tuck in showing their typical energy and enthusiasm! © Sophie Barrett

What a magical morning! Due to their nature wild dog sightings are often brief, a fast paced glimpse of them as they race through the landscape, before vanishing into the vegetation where we are unable to follow. To have been able to spend so much time with them was incredible. A real privilege to study the interactions amongst the members of the pack and between the dogs and the various scavengers, whose presence was a reminder that in the bush nothing goes to waste! Memories that I will treasure and a pair of lucky socks that might or might not have been washed since!