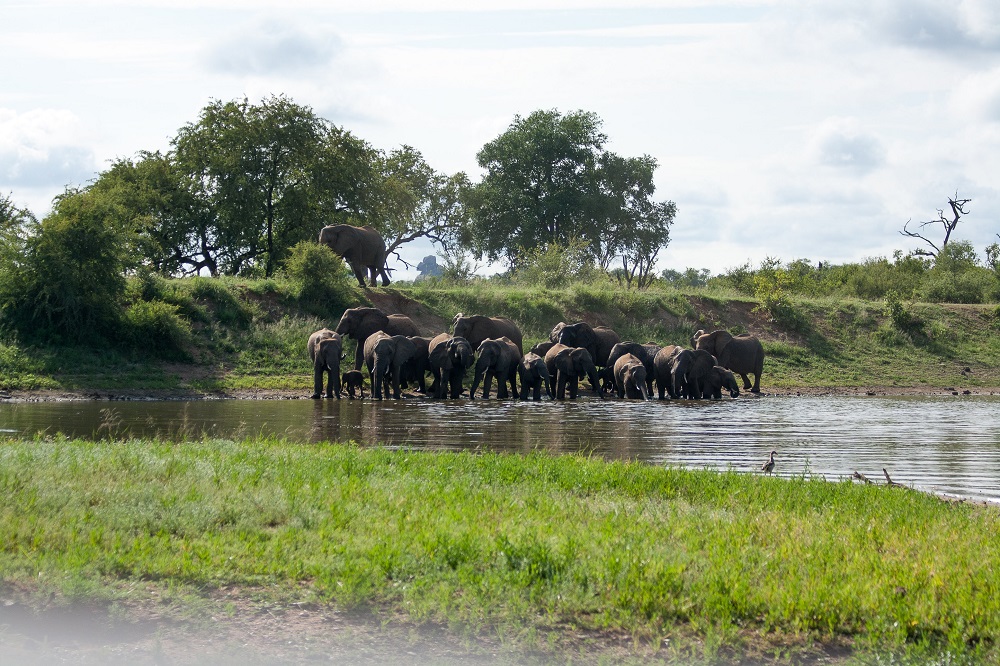 by Sasha Maggs and Richard Nyathi, guide and tracker at Garonga

Elephants can be some of the most interesting and entertaining animals to observe. They’re highly intelligent, with deep-set family traditions and mannerisms. They mourn their dead, protect their young (sometimes in ferocious ways, as we found out last October), and have incredible memories – sometimes even remembering individual humans, and even cars, from many years past!

Being in the presence of these incredible animals can be humbling, hilarious, and interesting! We had a sighting with all three of these emotions jam-packed into 10 minutes, about a month back.

We had just joined up with another safari camp vehicle on site with one of our female cheetahs and her two cubs, lying in the shade under a tree on this very warm day, next to a big dam on our reserve. However, we noticed the other car had moved a little further towards the water, away from the cheetahs. Confused, we radioed them and they waved us over to join them.

And that’s when we saw it. On the other side of the dam was a young male elephant emerging from the bushes, moving swiftly towards the water. Yes, we thought! This must mean the herd is close by! And sure enough, five minutes later, we saw another two emerge from the trees, then another, then more. We moved quickly to the side of the other vehicle and watched as these magnificent animals poured out of the trees and made their way to the water for a good drink, splash and swim.

Then slowly, they made their way around the dam towards our two cars. A nice little sandy drainage line leading to the water made for a good supply of muddy water for the elephants – and boy, did they get stuck into that. Just 15 metres away from our car were 20 to 30 elephants splashing around and having fun – we nearly got mud sprayed on us as well.

After their mud bath, they moved in front of and behind our cars and started making their way to the water. Some even stopped to have a good look at us as well. Having an elephant stare you down can be daunting, but my brave guests sat still and calm, some even with the biggest smiles on their faces, until the elephants had moved on. Soon, all the elephants had made their way right into the dam, crossing through it back to the other side where they had come from – even the two new, very small baby elephants!

My guests (and I’ll admit, myself as well) were so worried they weren’t going to make it! But again, the family bonds of the elephants pulled through and a couple of pushes from their moms and some others got the little ones to the other side, now nice and cool after a good, old swim. And off they went, disappearing once more into the bushes.

I may not have the memory of an elephant, but I know this is one memory, and safari camp story, I’ll never forget.