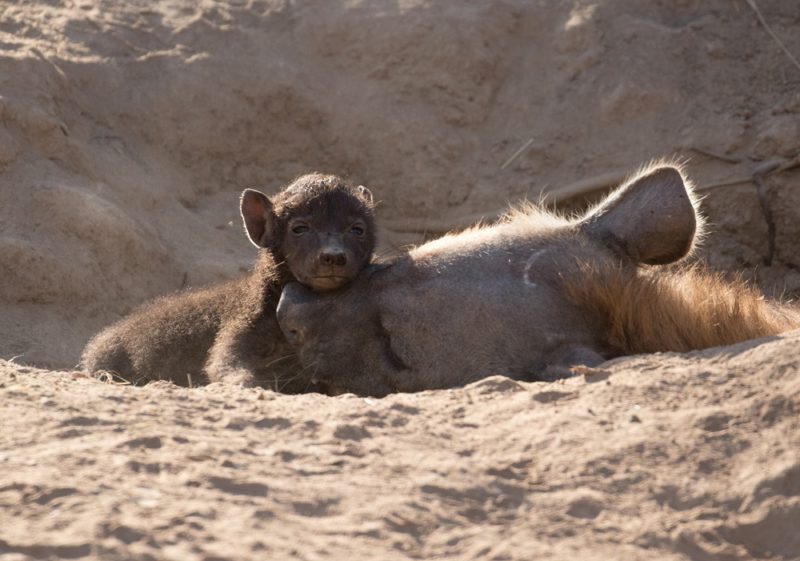 by Kaizer Mathebula (Guide) and Glandstone Sibuyi (Tracker) at Garonga

When we left the camp we had a mission. My safari camp guests were asking to see hyenas and we had a hunch where there might be an active hyena den-site on the reserve.

Whilst we were making our way over to the den-site we suddenly saw a young male lion, with blood on his face, at the side of the road – close to the entrance of the rumoured den-site. As we watched him and looked around we saw his partner further in the distance and between the two of them a clan of hyenas busy feeding on the remains of a baby giraffe!

The lions were young males, old enough to have been pushed out of their pride but not yet old enough to have taken over a territory for themselves. Their young age and inexperience meant that they lacked the confidence to chase off the full might of the hyena clan, and their full bellies could also have helped!

Watching the hyenas was brilliant, they are an active and a fiercely intelligent species. Their society is highly complex and whilst they are feeding the hierarchies need to be strictly observed. We could see one animal with cuts on its side inflicted by one of the other hyenas, obviously the animal had tried to sneak up the ranks for a ‘choicier’ piece of meat.

Whilst we watched, the hyenas chased each other around and every now and then chased towards some of the black-backed jackals that were waiting for their turn as well. Luckily for the jackals they are too small to be considered a serious threat to the larger predators so they are chased only briefly with no real attempt to catch them. Most people will associate spotted hyenas with their traditional “laughing” call. This is a sound that usually indicates stress or excitement. With the stress of observing hyena feeding etiquette the whole clan was making their ‘giggles’ as they fed which was amazing to hear! After a while the hyenas managed to pull off the largest pieces of the carcass and dragged them off in different directions to continue feeding.

When there were only a few hyenas left the male lions built up their courage and chased them off to finally reclaim their meal! A great morning out from the safari camp watching the predators of the reserve hard at work and seeing how each of them fills their role in the balance of nature.

A few days later, the same young male lions recovering from feeding on a kudu kill – no worse for wear after their encounter with the hyenas!