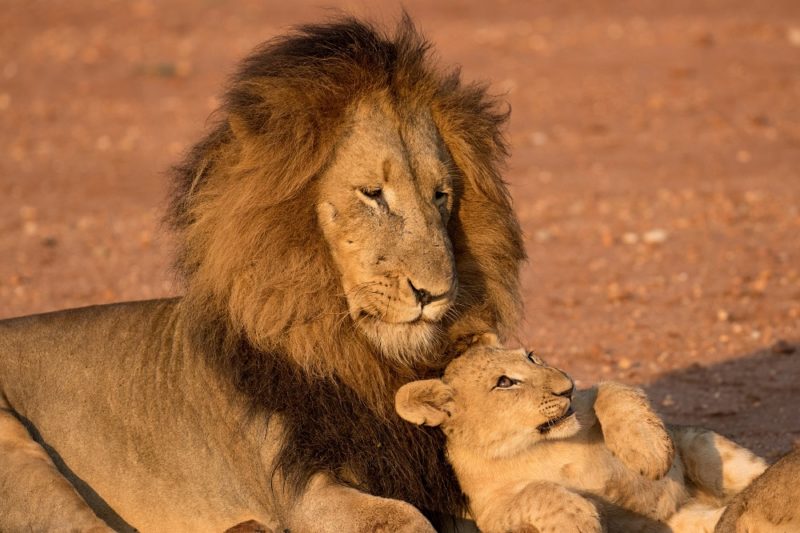 The life of a guide is riddled with drama. It’s like a soap opera that changes the channel and airing time on a daily basis, you have to work to keep up and you never know when you will see the next installment or which characters will be in it. One of the most thrilling personalities on our show has got to be the lions. Their relationships are incredibly close but also tumultuous!

Allow me to introduce the cast: the Garonga pride is ruled by a coalition of two dominant males, known as Kalahari Junior and Zamula, and they have an important role to fill. They need to protect the pride against other males, demarcate and defend their territory and, of course, help to create the next generation of lions. The heart of the pride is made up of three adult females: the eldest; her daughter; and her daughter’s daughter. Or a grandmother, a mother, and a daughter if you will. Each of these three adult females has two cubs, and each pair of cubs consists of a male and a female. 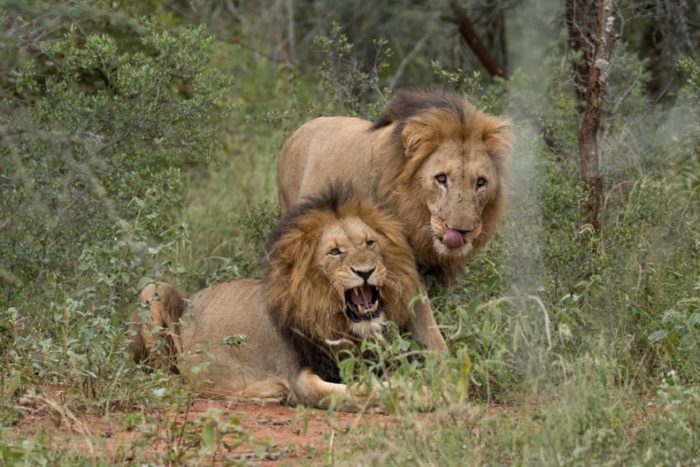 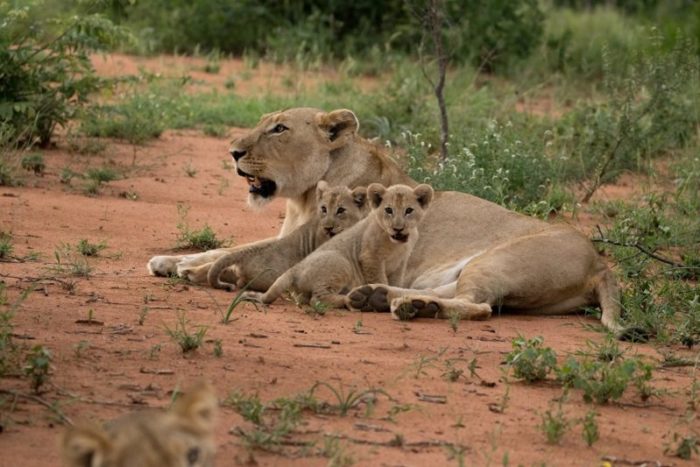 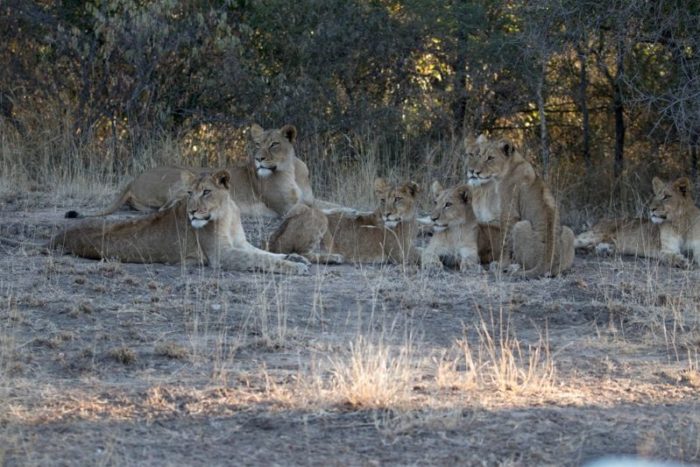 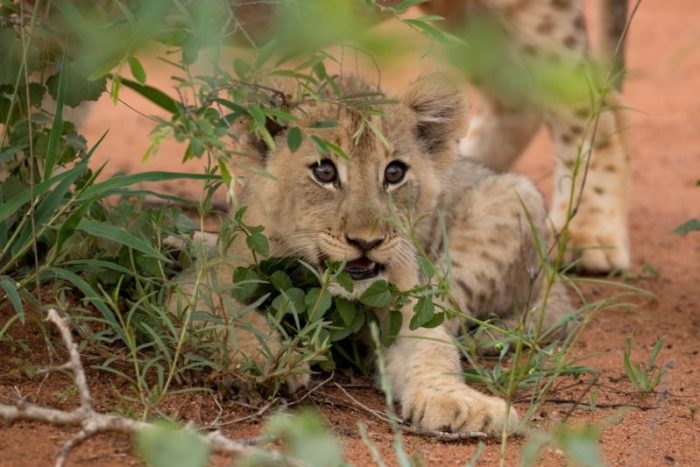 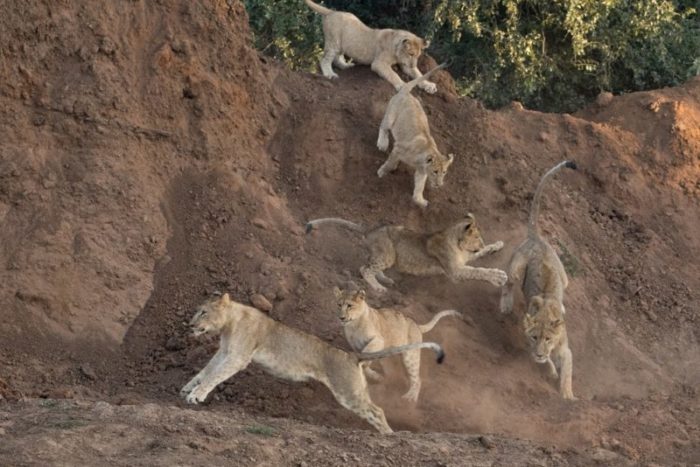 Following lion politics is addictive. On average, in the wild, a solitary male lion is able to defend his pride only for about eighteen months before the next male comes through and ousts him, and in the meantime the dominant male will constantly need to defend his title. Each time we see the lions, especially the males, we check for new cuts and scars. It is part of the patchwork of clues that tells us what has been happening with the animals since we last saw them. Luckily for us the Garonga pride is a strong one; the adults are expert hunters and the cubs are healthy and active. In order to keep them that way Zamula and Kalahair Junior periodically disappear, patrol their territory, and keep the sub-adult males in check.

Recently we noticed that the older dominant male, known as Kalahari Junior, was behaving strangely. Over the course of five days he stole every single kill that the pride made. Now this is not, in itself, the strangest behaviour to see in a male lion. The males will often, although not always, allow the females in the pride to do the hunting, come in after the hard work has been done and claim most of the spoils. The males are usually careful to save some meat for the cubs, but the females may well go hungry. What we were seeing was more than this, Kalahari was refusing to even share with the other male, Zamula,  or any of the cubs. He was gorging himself and seemingly doing it with intent. So after five days of food pilfering the pride was relieved when he left. Zamula stayed with the pride for another day or so and he then followed.

The rest of the pride sighed with relief and set about regaining the condition they had lost, for the next few days we were rewarded with wonderful sightings of an unusually active pride hunting both during the day and the night, but of the big males there was no further sign.

Now as every writer knows any drama worth its salt should include a love triangle. On the reserve our equivalent is that Zamula and Kalahari Junior divide their time between the Garonga Pride and the Tembe Pride! In other words they are the dominant males of both prides. Apart from when they are patrolling and defending their territory the fellas can usually be found in the company of one family or the other. However, as the days went past the males appeared to have disappeared completely!

Both prides appeared to be demonstrably unconcerned at their disappearance but the curiosity of guests and guides alike had been piqued. Thankfully we were not left to wonder for too long. One morning the tell-tell dinner plate sized tracks reappeared, were followed and led straight to our fluffy headed truants. Our head guide, Jaff, came back from drive rattled, over a cup of tea we quizzed him about his morning and he shared his worries. It seemed one of our favourite cast members might be making his last few appearances. Jaff had been to see the boys and had grave news to report. Junior had taken quite the beating, it looked, Jaff thought, like he might lose an eye, and like the sub-adult males he had gone to chase away had thoroughly gotten the best of him! Clearly there was only one focus for the afternoon drive, we would all need to try and find them again and gauge the situation for ourselves. No one doubted Jaff’s assessment, but if things were that serious we all wanted to pay our respects to the king. Seeing them in person did nothing to lessen our worries. Kalahari Junior was in a bad way.

With the benefit of hindsight we started to piece together what must have happened. Kalahari Junior had decided that the two sub-adult males (who had originally been born into the Garonga Pride) were getting over confident and over familiar on the boundaries of the adult males’ territory. He seemed to have been doing the lion equivalent of “carbo-loading” before going to see them off. He had disappeared without initially taking Zamula with him and this cockiness had cost him. It looked like the sub-adult males had been comfortably besting Kalahari Junior before Zamula managed to find him and help to chase them off. Looking closely we could see that Kalahari had a hole that looked suspiciously like it had been created by a lion’s canine in the top of his head! Zamula could not have been more of a contrast, he had escaped with barely a scratch. And so we began to wonder and to worry. Could this be the end of this strong coalition’s reign? What confidence had the fight gifted to the challengers? Did they realise the opportunity they had if they pressed their advantage? What would a takeover mean for the cubs of the prides, almost certainly too young to survive on their own and too young to be tolerated by the victorious males? And what was to become of Kalahari Junior’s eye?

Now it should be said that lions are nothing if not tough, and I mean tough with a capital “T”. Their social living structure provides an incredible advantage. In the Klaserie I have seen a lioness break her leg, watched it heal and observed in delight as she continued to operate as a key member of the pride for years afterwards. The only way this recovery was possible was thanks to the social tendencies of lions. The rest of the pride were able to continue to hunt, and to share the spoils with their injured family member whilst she healed from her injury. Kalahari Junior had Zamula, the Garonga pride and the Tembe pride to help him feed whilst he recovered but any time that an adult male lion spends not at the height of fitness is fraught with peril. As a guide one of the hardest things that you have to do is sit by and watch nature take its course. Once fences are put up a certain level of management is unavoidable but our policy in the reserve is to try to give the animals as natural a life as possible, typically we will intervene where an injury is the result of a human factor but will let nature take its course where an injury is naturally caused, monitoring to see if intervention is necessary for humane reasons. Monitoring, however does not need to be neutrally done! Over the following weeks we watched the lions assessing Kalahari Junior’s condition and rooting for him all the while! To our delight he was recovering in leaps and bounds! Incredibly it looked like he would make a full recovery, somehow the wound that had sliced deep into his eye lid had avoided the eye itself and the puncture wound on his skull appeared to be keeping free from infection. He would certainly have some new scars to add to his collection but he would be living to fight another day.

Whilst this episode is drawing to a close the series is far from over. Kalahari Junior and Zamula’s challengers will be back and it seems all too likely that the days in power for our grizzled heroes are now numbered. By now Kalahari Junior has made a full recovery and so the battle for power will not be an easy one. We hope it will play out only after the cubs in our prides are old enough to survive a takeover unscathed but we can be sure of nothing. The only way to find out is to suit up and head out with eagle eyes and hearts in our mouths to see if we can find the next installment in this political thriller.