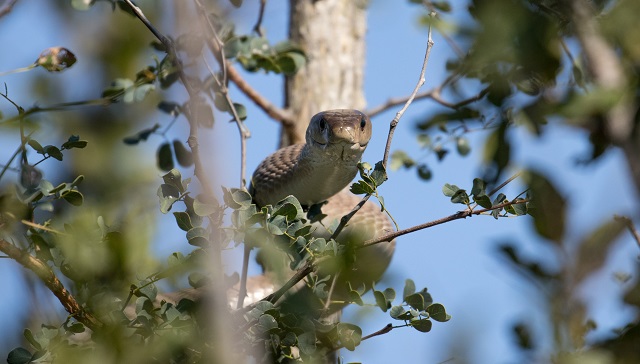 To be well suited as a Field Guide and a Tracker you need to have different parameters on danger. A scream of terror causes a flood of adrenaline in a Field Guide and the overwhelming urge to run to the source clasping a camera in one hand and a snake wrangling kit in the other to see what excitement has been uncovered. Something in the development of our survival instincts went astray. We are drawn to creatures that most humans consider deadly and downright disadvantageous for a long and healthy lifespan.

So, with this in mind, it is perhaps unsurprising that one morning Bongi and I were chasing around on some fresh cheetah tracks, eyes gleaming at the challenge. Bongi was doing some systematic tracking, out on foot following one track and then the next to find the animals. Whilst I was doing some intuitive tracking, circling the block in the vehicle, checking to see if the tracks emerged and trying to predict what their movements would have been or would be likely to be so we could slip ahead of the coalition of cheetahs and spot them that morning. We covered a few uneventful sides of the block when, BINGO, cat tracks on the road ahead. I stopped the car, gave the guests a few reassuring words and leapt out for a closer look. Not the cheetahs we were following but an even more elusive creature – a female leopard – had been down the road and recently judging by the crispness of the tracks. I followed them for a few metres head down to get a feel of the gait and behaviour of the animal when I felt an ominous prickling on the back of my neck. I froze. Call me superstitious but I was convinced something was watching me. I raised my head to scan around. Leopards love to rely on their excellent camouflage and from the freshness of the tracks it was entirely possible the female was lying somewhere close-by in the bushes watching my every move. I scanned carefully in the bushes on my left, slowly coming round to the road where my eyes met a pair of black pools, lined with silver and typically associated with a swift, anxious and painful death.

A few metres ahead of me, starting to cross the road, was a black mamba, about 3m in length and raised up about 50cm from the ground. The mamba had spread its hood (oh yes they have a hood) and was daring me to come closer. I stood for what felt like an age staring transfixed at the snake before common sense kicked in – I should return to the car and get my camera – what a photo opportunity! I called to the guests to make sure they were enjoying this rare and special sight in the bush and slowly backed towards the vehicle. My movement broke the spell and the extra space relaxed the snake, it turned and slid back towards the bushes. With great excitement we approached it in the game viewer and the serpent climbed a nearby knobthorn gave us all a piercing stare before moving off on its own business once more.