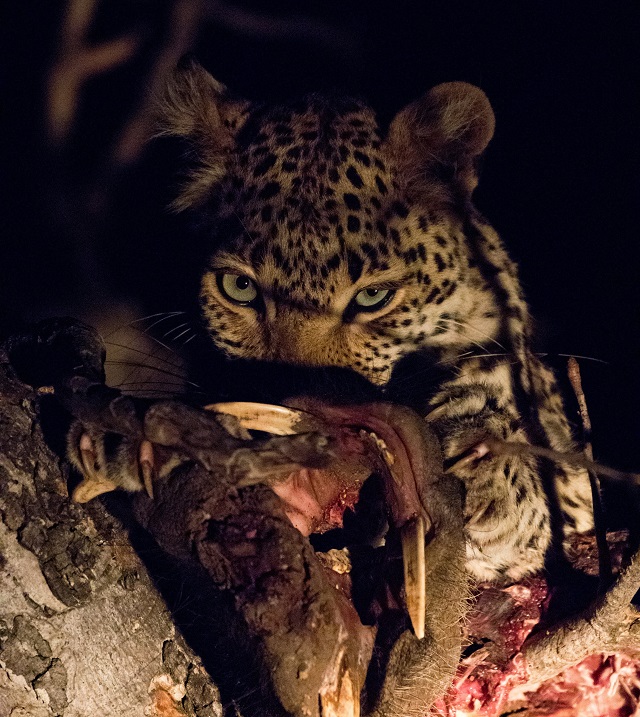 Along with the photo competition that guests from both Garonga Safari Camp and Little Garonga can submit their safari moments to, we have also started an annual Wildlife Photo Competition for our guide and tracker teams. The teams: Jaffet and Richard; Josia and Phineas; Samantha and Stewart; Derrick and Kaizer; and Sophie and Bongi, get to explore the bush daily on a game drive or on foot, regularly experiencing fantastic sightings, which make for great photographic opportunities.

While a little healthy competition never harmed anyone, this is just a fun platform for our guides to showcase their wildlife photography skills in the field. Wildlife photographer, Paul Changuion, judged the submissions sent in by our guides last year. Without further ado, here are the winners of last year’s Wildlife Photo Competition.

During an afternoon game drive in late October, Bongi called out “What’s that?”, which was met by a chuckle from Sophie. She pulled out her binoculars and starting scanning the area where he was looking because she knew that if Bongi couldn’t identify whatever it was without binoculars, then she certainly wasn’t going to be able to. On the tracker seat ahead, Bongi began to squint and muttered ‘pangolin’. At that point, Sophie was doing a passable impression of a spinning top – binos firmly glued to her face, calling out “Where are we looking?!”. And then she finally saw it, or more accurately them. Their very first pangolin sighting was also their second pangolin sighting as there was a female carrying her youngster on her back. Many guides never get the chance to see a pangolin – let alone two- during their entire career so they most certainly count themselves lucky! To read the full story, visit the first blog of our Safari Camp Stories series titled A Double Pangolin Sighting.

2nd Place – Cat Got Your Tongue

It was an afternoon in mid-November that was ripe with possibilities, Sophie had a vehicle filled with new guests and Kaizer and Sophie were keen to finish tracking down the Garonga pride. Kaizer was taking the sleep-out guests and headed straight to where they had left the tracks in the morning. Sophie got waylaid by a gang of boisterous elephant bulls and saw King Raf (the oldest elephant bull in the reserve) get outsmarted by a sassy young bull. Whilst they were with the elephants, Kaizer called over the radio to say that he had found the lion pride and that the cubs were with them. At this point the pride had four cubs, two who were about 6 and half months old and two who were coming up to 2 months old. When Sophie pulled into the sighting she blinked, rubbed her eyes and gasped – there were not four but SIX cubs!

The oldest female in the pride had given birth since anyone had last seen her and the tiny bundles she was suckling looked to be about two days old! It was late evening and they sat in silent awe watching as this experienced female nursed and then washed her cubs. Once she was finished she glanced up at them, stood, stretched and, with incredible gentleness, picked up one of the cubs in her mouth. She levelled an assessing stare at Sophie and started walking towards her, and for one bonkers moment, she thought the lioness was bringing her cub to Sophie for a lion king style introduction to the reserve, at the last moment the lioness changed direction and stalked silently into the setting sun.

The Garonga pride had some recent additions to the pride, which were now old enough for the pride to move the den site. That afternoon Derrick and Kaizer were determined to find where the pride had moved to. They set out and were successful in finding them but the lions weren’t all that they found… As Derrick was positioning the vehicle to glimpse the lion cubs nestled inside the den he spotted two eggs on the ground. Curious, he pulled closer to work out what bird they belonged to and as he examined the area Derrick realised the answer was right in front of him, blending perfectly with the leaf litter and not so much as batting an eyelid at the gigantic tyre that was passing next to her nest was a fiery necked nightjar. It was impossible not to record such flawless camouflage.

Leopards are the most elusive cat, feeling more at home when the shadows have lengthened. During the daylight hours they are shy and skittish, they often take comfort in the darkness becoming bolder and tolerating an observer’s presence. Sophie and Bongi had found this particular leopard on the morning drive when they were tracking a coalition of male cheetahs that had moved into the Garonga section of the reserve. As soon as they spotted the leopard, it raced down the trunk of the marula tree and disappeared leaving a warthog carcass stashed in the tree’s canopy.

Sophie and Bongi locked eyes and gave each other an excited nod – they knew precisely where they would be driving once the sun had set. After darkness fell they made their way back to the marula tree and found, to their delight, that the young leopard had returned and was happily feeding on the warthog remains. With only the light of the stars (and a safari spotlight) to see them by, the leopard’s attitude had completely changed. Sophie, Bongi and their guests were presented with a poser of epic proportions and sat transfixed, snapping away, as the leopard locked them in place with its intense stare.