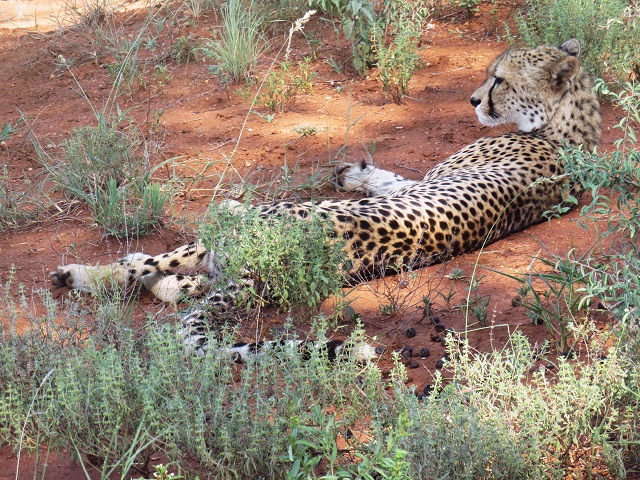 by Derrick Nyathi and Kaizer Mathebula, guide and tracker at Garonga

It was one of those mornings where the bush was alive and bristling with activity. We could barely move without seeing animals.

After a few days of careful tracking, we had found a young female cheetah. We enjoyed a lovely relaxed sighting where she was lying down, looking to all the world like she was fast asleep when, suddenly, her head popped up. With her incredible sense of hearing she had heard something moving through the bush.

Gone was her lazy demeanour as she was up and stalking through the bush in one single movement. To us it was a mystery what she had heard; a cheetah’s hearing is far more acute than a human’s and we could neither see nor hear what she was following. Whatever it was though was clearly something delicious!

Whilst we were following her, she put on a burst of speed and disappeared! And so the search for her began again. We picked up her tracks and then in the background we heard the impalas’ alarm calling so we had our direction and raced off! Unfortunately, as a young cheetah, she was still learning to perfect her hunting technique. She had detected a bachelor herd of impalas, stalked them excellently but had gotten ahead of herself and become exposed.

Like their big cat predators, impalas also have fantastic senses. As an animal that is on everyone’s menu, they have to be constantly on alert and luckily for the males that morning, they had spotted the hungry female cheetah as she approached them. After spotting her they sounded their alarm call, which let both the cheetah and us know that the impalas had seen her and the jig was up!

At this point, the cheetah had no choice but to move off as the noise was likely to draw the attention of other predators. That could be very dangerous for the cheetah because any of those predators entering the scene would see her as competition for food and attack her.

Looking sad that she hadn’t managed to catch herself a tasty breakfast, she skulked off into the bushes to try her luck somewhere else.