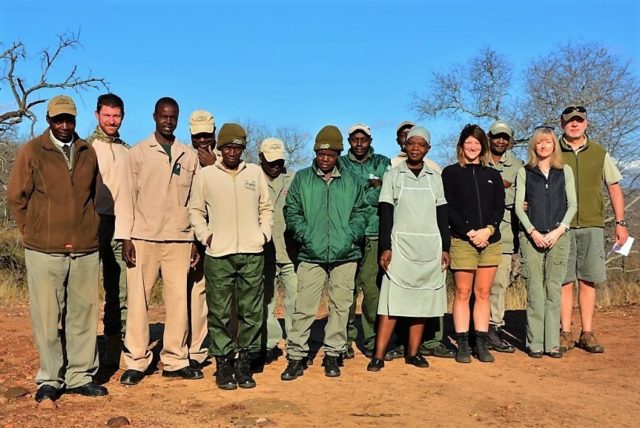 The Greater Makalali Private Game Reserve (GMPGR), together with the Pidwa Wilderness Reserve forms the Greater Makalali Nature Reserve (GMNR), is a 22,000-ha game reserve situated outside Gravelotte in the Limpopo Province. The reserve has seven owners who have retained ownership of their individual properties but have removed fences to create a conservancy allowing game to traverse the entire extent of the reserve.

The reserve is home to the Big 5, with previously eradicated species including lion, elephant, rhino, hippo, buffalo, cheetah and hyena being reintroduced. Leopard, brown hyena and the smaller mammal species as well as the endangered ground hornbill and the many threatened and endangered vulture and raptor species are present on the reserve.

To run such a large reserve, we need a very special and motivated team. From mending fences to ensuring legal and environmental compliance and liaising with the Anti-Poaching Teams, the team has their work cut out for them – nothing is too small!

The EM programme was started by the South Africa’s National Department of Environmental Affairs in response to the challenges of high levels of unemployment adjacent to conservation areas, coupled with increases in the illegal wildlife trade. The programme aims to grow conservation capacity within South African National Parks’ (SANParks) protected areas including provincial and private reserves.

Four Environmental Monitors are deployed on the GMPGR through an integrated plan to assist with conservation support, including various projects and activities to maintain sustainability within the GMPGR.

Back to the Wild Programme

The Back to the Wild (B2W) Programme seeks the promotion and conservation of wildlife, fauna and flora, and the natural environment, including the ecosystem in and on the reserve land, as well as establishing a formal release facility for compromised and rehabilitated indigenous wildlife on the reserve land.

Over the years, the GMPGR has facilitated the release of several species from various centres on a small-scale. The capacity for release within GMNR has been greatly increased through the construction of six suitable re-wilding enclosures within a release facility, with the funding assistance of the Humane Society International. A slow-release process is carefully managed to ensure previously compromised and rehabilitated animals are successfully released back to the wild.

Lydia Raganya and Annickiy Mafogo are the Environmental Monitors stationed at the B2W facility, providing the necessary dedication and care of the wildlife to ensure the success of this programme.

The K9 Conservation Anti-Poaching Unit (APU) has provided logistical backup and support to the GMNR since 2014, through the deployment of elite, highly trained and specialized working-dog units. The APU is based on the reserve permanently, patrolling both in vehicles and on foot. The field rangers and dogs are carefully selected and paired to maximize efficiency and effectiveness.

The Belgian Malinois, originally bred for herding purposes, have the perfect temperament, intelligence, dedication, agility and diligence to be anti-poaching K9 soldiers on the frontlines of anti-poaching efforts.

K9 Conservation’s primary function is to aid and assist the GMNR to counteract illegal hunting and wildlife trade by poachers and poaching syndicates. The exceptionally dedicated APU on the GMNR is led by Peter Wearne, who has been based at the GMPGR since October 2014.

For further information on GMPGR and GMNR or to support Back to the Wild, please contact us.